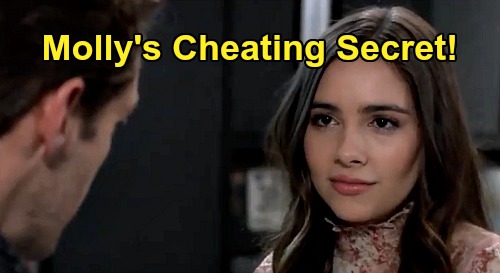 General Hospital (GH) spoilers tease that Molly Lansing-Davis (Haley Pullos) will soon keep secrets from TJ Ashford (Tajh Bellow). GH viewers know Molly was unbelievably frustrated with TJ for ghosting her. She pointed out that if she were in his position, she never would’ve just left him worrying like that.

Of course, Jordan Ashford (Briana Nicole Henry) by suggesting that Molly needed to grow up. Jordan argued that Molly was acting like a child and even blamed her for TJ’s behavior. As a result, Molly was certainly in the mood for that pick-me-up she got at Brando Corbin’s (Johnny Wactor) garage.

Molly felt like her luck might be turning around, so how far did she take things? General Hospital has been including more hot hookups lately – like the ones between Julian Jerome (William deVry) and Britt Westbourne (Kelly Thiebaud). Will GH fans see a morning-after scene for Brando and Molly in bed?

It’s a possibility to consider based on the latest General Hospital spoilers. After an unconscious TJ is dumped in front of GH, he’ll come to and hate that Molly’s been so concerned. TJ never would’ve ghosted Molly like that and will be more than ready to get their romance back on track.

In fact, TJ will have a new plan for their future that doesn’t involve marriage at all: a domestic partnership. TJ will let Molly know that he only cares about her and continuing their love story. This marriage stance will no longer matter, especially after everything TJ’s been through.

Molly will tell TJ that’s the perfect solution, but she’ll really be putting on a show for his benefit. She’ll actually have something on her mind that leaves her quite conflicted. General Hospital spoilers say Molly will worry about her impulsive behavior when she thought TJ was shutting her out.

So we have to ask…what impulsive behavior? Molly has only been asking questions and visiting an auto garage for car repairs. There’s nothing impulsive or worth worrying about in any of that.

This seemingly points to Molly keeping a secret – like an impulsive hookup with Brando. It might even be something that GH reveals through a flashback somewhere down the line.

Molly didn’t have confirmation that things were over with TJ, but she was certainly starting to believe they were done. Even so, this would be cheating and could set up a major betrayal blow.

Will GH reveal that Molly slept with Brando behind TJ’s back? Could this be a deal-breaker for TJ? This could be a ticking time bomb for Molly and TJ’s relationship!