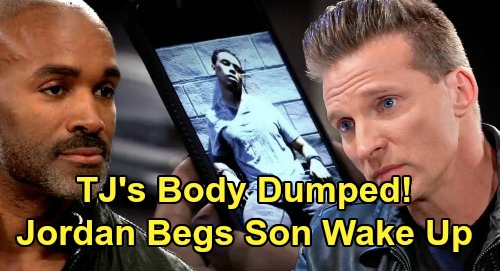 General Hospital (GH) spoilers tease that Cyrus Renault (Jeff Kober) will keep his promise. He may be a baddie, but he’s apparently a man of his word! After Jordan Ashford (Briana Nicole Henry) grants Cyrus his freedom, Cyrus will order his goons to release TJ Ashford (Tajh Bellow).

Of course, “release” is perhaps a far too nice way of putting it. General Hospital spoilers say TJ’s kidnappers will simply dump him in front of GH. TJ’s been through a rough time in captivity, so he’ll be pretty banged up.

Sadly, TJ will have bruises all over his body along with a few scars. He’ll also have a concussion and will be unconscious when he’s first found.

Jordan will panic when she sees TJ in such bad shape, so she’ll rush to his side and gently touch his face. As Jordan and Curtis Ashford (Donnell Turner) push TJ to wake up, his eyes will eventually flutter open.

It’ll take TJ a moment to figure out where he is and what’s going on, but he’ll be relieved once everything sinks in. TJ will be thrilled to know his nightmare is finally over.

That’s when TJ will see the person he’s missed most throughout his hostage crisis. Molly Lansing-Davis (Haley Pullos) will appear, so TJ will be over the moon about their reunion. He’s had many days and nights to think about their marriage fight, but the silver lining is he’ll have a solution.

General Hospital spoilers say TJ will want to enter into a domestic partnership. He’ll ask what Molly thinks of the idea and she’ll absolutely love it – or so she’ll claim. Truth be told, Molly will be quite torn over this suggestion. It seems like a good compromise on the surface, but Molly will be uneasy about the whole thing.

TJ’s been through enough, so Molly won’t want to shut him down and make matters worse. At the same time, Molly has to do what’s right for her. She’ll do some secret reflecting on her relationship in general – and that could spell trouble once TJ recovers.