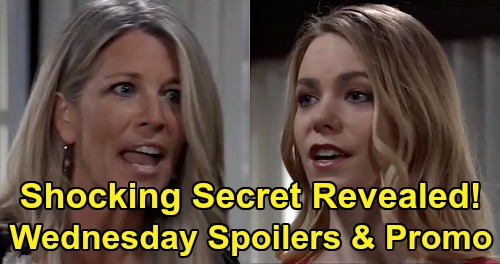 General Hospital (GH) spoilers for Wednesday, April 8, tease that a very special episode’s on the way. GH will explore the complex relationship between Carly Corinthos (Laura Wright) and Nelle Benson Archer (Chloe Lanier), so fans can expect to see some newly created flashbacks.

The Bensons were Carly’s adoptive parents, so they’ll play a crucial part of the story – especially since there’s a Nelle connection here. GH viewers will recall that Nelle came to town on a mission for vengeance. Nelle’s supposedly biological father, Frank, told her Carly cheated him out of the money for her kidney.

That left Nelle furious and fixated on making Carly pay for what was stolen. The truth is Frank was a gambler and blew the money immediately. That money also came from Jasper “Jax” Jacks (Ingo Rademacher), not Carly. There was never really any need for Nelle to have this grudge, but Frank started this whole feud with his lies.

General Hospital spoilers say Carly and Nelle will rehash the past in Wednesday’s episode. Nelle will want Carly to admit they’re just alike, but good luck with that! It’s doubtful Carly would ever see much of herself in Nelle other than their shared stubborn streaks and penchant for bickering.

However, we’d argue that Nelle’s right. Just look at what happened when Carly locked Nelle on the roof, forged her signature and let Bobbie Spencer (Jacklyn Zeman) get rid of the document. That whole scheme was a pretty Nelle-like thing to do, wasn’t it? Carly’s just as manipulative as Nelle when you get down to the heart of who they are.

There’s a good chance that’s what these flashbacks will reveal. General Hospital spoilers point to a major bombshell that’ll make shockwaves on the canvas for months. It’ll be something related to Nelle and Carly’s history, but could it affect Nina’s future, too? It will if Carly stole Nelle’s half-heart pendant necklace when she was younger.

We know there’ll be a moment where Young Carly sees Young Nelle with Frank in the flashbacks. Young Carly’s resentment will bubble up since Frank didn’t care about her at all. The thought of Frank actually caring for another kid will leave Young Carly angry – perhaps angry enough to steal Young Nelle’s necklace behind her back.

Of course, it’s not like Nelle was some golden child since Frank was willing to sell her kidney to Jax! Nelle may remind Carly of that as their fight escalates at Crimson. Meanwhile, Nina will grow concerned about Carly’s constant attacks. Nina will contend that Carly’s coming perilously close to harassing Nelle.

After Nina expresses her fears to Jax, he may intervene and hope he can talk Carly into backing off. It won’t be good news for the custody case if Carly keeps this up. GH spoilers say Nina will also reflect on her biological daughter this Wednesday. Nina will feel like her daughter’s still out there, so Nelle will probably be revealed as the real deal by the end of the show – at least to fans at home!

It’ll take a little longer for Nina to get updates, but it’s nice to see some movement in this storyline. On another note, Willow Tait (Katelyn MacMullen) will be all riled up after her latest run-in with Nelle.

Willow will argue that they have to figure out what they’re going to do to keep Wiley Quartermaine-Corinthos (Erik and Theo Olson) safe from Nelle. It’s clear that Willow will be more determined than ever to protect Wiley from his out-of-control mom. Josslyn will also have a plan in mind to handle Nelle, so she’ll turn to Jason Morgan (Steve Burton) for help.

Since Nelle is evil in Joss’ eyes, she’ll want Jason to make her a promise. Josslyn will feel like Nelle must be stopped, so Jason will ask what Joss wants him to do. Will Josslyn’s plot be a fatal one? Jason’s the guy to call on for plots like that, so we’ll see what Josslyn pushes for.