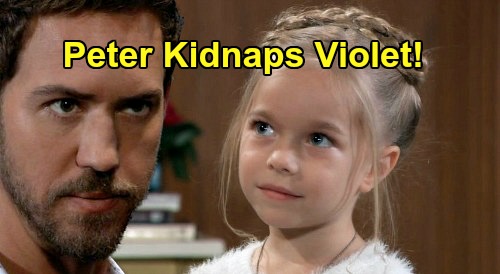 General Hospital (GH) spoilers tease that Peter August (Wes Ramsey) may be forced to take drastic action. GH fans know Peter’s keeping some massive secrets under wraps. Peter framed Liesl Obrecht (Kathleen Gati) for his own crimes, so he’s got a lot riding on that plan.

Of course, Robert Scorpio (Tristan Rogers) isn’t convinced that Peter’s innocent and intends to clear Liesl’s name. We’ve also got Hamilton Finn (Michael Easton), who’s changed his tune about Peter and even apologized. Finn and Anna Devane (Finola Hughes) are back together, so their Peter drama has died down for now.

However, it looks like it’ll soon rev back up thanks to sneaky Robert. He’ll be a guest at Violet Barnes’ (Jophielle Love) upcoming birthday party, which is sure to be an explosive bash. So where is all of this heading? It’s clear that Peter’s downfall is brewing, but you can bet he won’t go down without a fight.

Perhaps there’s a reason Finn was once so concerned about the threat Peter posed to Violet. There may also be a reason GH has really highlighted Peter and Violet’s bond for the audience. General Hospital fans have seen them playing together onscreen – and Violet is clearly crazy about Peter. The show could be setting the stage for a major bombshell as this story blows up.

Peter may try to convince himself that he’s a good person, but he’s obviously a villain. This is someone who called for Andre Maddox (Anthony Montgomery) to be stabbed – fully intending for him to end up dead. Peter also ordered another hit on Andre as well as Franco Baldwin (Roger Howarth).

Just because Peter had a crisis of conscience later doesn’t absolve him of guilt. Peter still called for their deaths initially. Plus, Drew Cain (Billy Miller) is presumed dead because of Peter – and that’s downright unforgivable. Peter is a true GH baddie who’s proven that he’ll do whatever he has to do.

With that in mind, will kidnapping be next on the list? Whether it happens at the end of this birthday blowup or perhaps down the road, Peter could easily scoop up Violet and try to use her as leverage. We can assume Peter will be desperate to avoid punishment, especially for Drew’s murder.

Now most us probably wouldn’t buy that Peter would hurt Violet. There are levels when it comes to villains, and Peter’s not in the “willing to hurt a kid” category.

Even so, Finn can’t be certain of what Peter might do. There’s also the possibility that Violet could inadvertently land in danger. The point is Finn’s fears about Peter may have been warranted. Anna may soon see that if Peter takes little Violet hostage! It seems like the perfect way to send this storyline spinning out of control.

We’ll offer updates as other GH news rolls in. General Hospital spoilers say some shockers and shakeups are coming up, so stay tuned. Do you think Peter will kidnap Violet once he’s backed into a corner? That might show Anna and Maxie Jones (Kirsten Storms) just what Peter’s capable of! Be sure to drop by CDL frequently for sizzling General Hospital spoilers, news and updates.