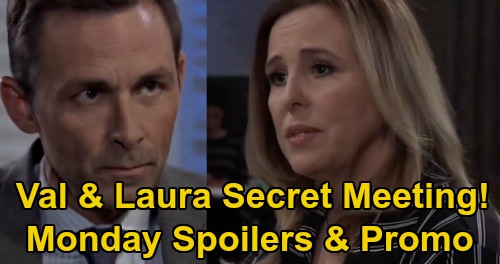 General Hospital (GH) spoilers for Monday, April 13, tease that Nina Reeves (Cynthia Watros) will spend some time reflecting on the things she’s done and who she really is. Nina will tell Jasper “Jax” Jacks (Ingo Rademacher) that maybe she’s more like Nelle Benson Archer (Chloe Lanier) than she wants to admit.

Of course, Nina had better start accepting the idea since Nelle was just revealed as her biological daughter! Little Janelle had the necklace on in those flashbacks, and the other half of the heart pendant was prominently displayed in Nelle’s keepsake box. It’ll be interesting to see how Nina and Nelle ultimately find out the truth about their connection.

In the meantime, Valentin Cassadine (James Patrick Stuart) will sit down for a conversation with Laura Collins (Genie Francis). Laura will point out that Lulu Spencer (Emme Rylan) doesn’t know anything about this meeting. 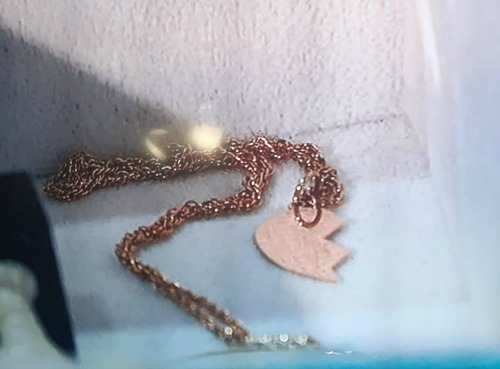 GH spoilers say Laura will intercept a message that was supposed to be given to Lulu. If that involves Charlotte Cassadine (Scarlett Fernandez) and the custody agreement, perhaps Laura will step up to deal with it herself. Laura wasn’t able to stop Cyrus Renault’s (Jeff Kober) release, but she may feel like she can handle Valentin!

However, GH fans can expect Valentin to gain some sort of advantage on Monday. No matter how this secret Laura meeting plays out, Valentin won’t lose sight of his ELQ takeover goal. That should remain Valentin’s priority in the weeks ahead, so we’ll see if his advantage ties in with that.

Other General Hospital spoilers say Robert Scorpio (Tristan Rogers) will drop by to see Liesl Obrecht (Kathleen Gati) in lockup. Liesl will fume over Peter August (Wes Ramsey) covering his tracks and hope Robert can find a way to clear her name.

Robert certainly wants to bring Peter down, so he’ll do everything in his power to put the right person behind bars. General Hospital spoilers state that Liesl will get another visitor later. Maxie Jones (Kirsten Storms) will show up and admit she came to say goodbye.

Liesl will likely once again insist she’s innocent and beg Maxie to believe her, but Maxie’s in too deep with Peter. Since Maxie’s putting her faith in Peter instead of Liesl, she’s setting herself up for major heartache.

Anna Devane (Finola Hughes) will be in the same boat once Peter’s exposed down the road, but she’ll remain completely duped for now. Peter will assure Anna that he’ll do everything in his power to keep what he has. Although Peter’s determined to make sure everyone stays fooled, that plan won’t work forever.

Finally, Lulu will have a fierce faceoff – and it looks like it’ll once again be with Brook Lynn Quartermaine (Amanda Setton). Brook Lynn always knows just the right buttons to push, so she’ll do something that prompts another physical attack.

This rivalry is still going strong and will only get worse if Brook Lynn grows closer to her ex and Lulu’s boyfriend, Dustin “Dusty” Phillips (Mark Lawson).