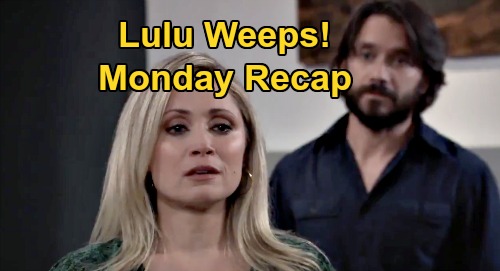 Elizabeth was still skittish about the idea of blackmailing Nikolas Cassadine (Marcus Coloma) and Ava Jerome Cassadine (Maura West), but Franco agreed with Scott that they were still doing the right thing.

At the nurses’ station, Nikolas approached Britt Westbourne (Kelly Thiebaud), who needled him about remaining away for so long and hurting Spencer Cassadine (Nicolas Bechtel).

Talk quickly turned to Nikolas’ marriage to Ava, and Britt urged Nikolas to cut ties with Ava before he got onto Ryan Chamberlain’s (Jon Lindstrom) radar. Scott then got off the elevator nearby and waved cutely at Nikolas.

Britt saw Scott and tracked him down in the hallway, urging him to get his friend Ava to divorce Nikolas. Scott said that Ava and Nikolas would be “splitsville” soon, and Britt wondered how he would know that.

Elsewhere in the hospital, Franco and Elizabeth continued to argue about the merits of their plan to blackmail Nikolas and Ava, with Franco arguing they desperately needed the money.

At the Metro Court, Ned Quartermaine (Wally Kurth) approached Olivia Quartermaine (Lisa LoCicero) and Alexis Davis (Nancy Lee Grahn) on the terrace. Olivia wanted to hear all about how Ned helped Alexis last night, and Alexis explained about how she was upset, and how Ned talked with her.

Olivia stepped away, and Alexis swore that she would never say anything to Olivia about their tryst.

Alexis stepped away, and Olivia returned and told Ned that Alexis was drinking again. Ned was horrified, and Olivia assumed that Ned must have seen Alexis drinking last night and tried to help her. It seemed to sink in for Ned that he was a part of Alexis’ drinking binge.

Gladys squawked about how she wanted Brando to be a trusted associate to Sonny, and both Carly and Sam McCall (Kelly Monaco) told her that she basically needed to pipe down.

Near the elevators, Jason Morgan (Steve Burton) and Cyrus Renault (Jeff Kober) were approached by Sonny Corinthos (Maurice Benard) and Brando. Soon, Jordan Ashford (Briana Nicole Henry) walked off the elevators and said she had questions for Brando about Jason’s motorcycle accident.

Jordan said they narrowed down the problem to the stabilizer which had been tampered with. Brando blustered that he didn’t do it, and Sonny said that Brando should answer no questions without his lawyer there.

Gladys spoke up, saying that Sonny should get Brando a lawyer, and Sonny said that Brando could use whatever lawyer he chose. Brando got peeved and said that he’d come down to the station tomorrow with a lawyer and without the help of anyone there, then he left in a huff.

Cyrus looked amused, and Gladys fussed at Sonny, then she left angry.

Jordan took Carly aside and said that the police had a few more questions for her about Nelle Benson Jerome (Chloe Lanier).

Carly said that she already answered questions, and Jordan explained that since Nelle was found on the Pennsylvania side of the river, the detective with jurisdiction had some remaining questions. Jordan said that the sooner this was dealt with the better, especially since Nelle’s autopsy report was in.

Elsewhere, Sonny talked briefly to Ned and Olivia, not telling Olivia about Dante Falconeri’s (Dominick Zamprogna) return to Port Charles. And in another area, Sam noticed that Alexis was acting intoxicated. Alexis sat down her glass as she left, and Sam picked up the glass and smelled it for booze.

Sonny talked with Jason in a private area of the restaurant, saying that they now have a problem on their hands with Brando. Brando materialized, saying that he wasn’t the problem, but that he was the solution.

“This is my way into Cyrus’ organization,” Brando insisted. Jason thought that if Cyrus was convinced by Brando’s display, then he’d make Brando another offer.

At Charlie’s Pub. Ava and Julian Jerome (William deVry) talked about Ava’s visit to Ryan. Julian learned that Ryan had Nelle’s letter, and he urged Ava to go along with what Ryan wanted and divorce Nikolas.

Ava said that she wouldn’t do that because of the money involved, and she said that she had a counter move. Julian balked, but Ava pointed out that she could do what Ryan wanted, and there was no guarantee that he’d honor the deal anyway.

Soon, Nikolas came in and talked with Ava privately. Nikolas wanted Ava to stay away from Ryan, but Ava said cryptically that she couldn’t because Ryan had something she wanted.

Nikolas did his best to convince Ava to tell him what was going on, but Ava wouldn’t spill. Ultimately, Ava took off for Pentonville.

Outside the pub, Gladys was about to go in when Cyrus approached her. Gladys and Cyrus met and shook hands. Cyrus said that he was very impressed with Brando, and that Sonny was grieving, which must explain his harsh attitude toward Brando.

Cyrus told Gladys that if she or Brando ever needed a friend, then they should call him.

At Lulu Spencer’s (Emme Rylan) place, Dustin Phillips (Mark Lawson) walked into the living room from the bedroom shirtless. He immediately stopped when he saw Dante standing at the door.

Dante briefly imagined attacking and shooting Dustin, but in reality, the men shook hands and officially met. Dante went to wash up, and Dustin left to give Lulu and Dante some privacy.

Lulu asked Dante how he was, and things quickly turned contentious, with Lulu noting that she wasn’t the one who ended their marriage. Lulu wondered if Dante knew what the divorce did to her, and she fumed about how she crawled out of the wreckage that he left.

Dante looked a mess as Lulu ranted about how she did what he asked and moved on. Lulu admitted that if she had known that “forever” was going to be a year-and-a-half, then she would have waited for Dante.

Dante apologized for hurting Lulu, and Lulu said that she didn’t realize how angry she’d feel at his return. Lulu said that suddenly this whole life that she built for herself without him seemed totally different.

“He’s not you, Dante, but he’s a good person,” Lulu said. “Kind and generous, and he loves our kids. And he loves me.” Dante said that he should go find a place to crash, and he vowed ever to leave their family ever again.

Dante left and paused outside the door, with Lulu standing on the inside of the door crying.

That was a terrific episode of GH, and there’s plenty more coming tomorrow, so be sure to tune in! We’ll give you updates as GH news comes in. Don’t forget to check CDL often for the latest General Hospital spoilers, news, and daily episode recaps.