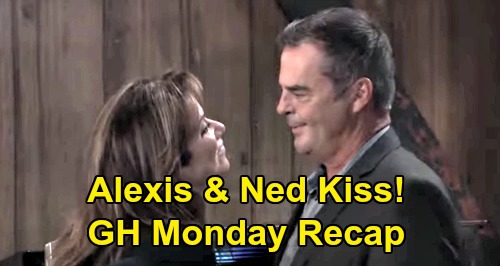 Robert urged Olivia to tell Ned Quartermaine (Wally Kurth) that she was back, but Olivia stalled, saying that she might not have much of a marriage to go home to.

Elsewhere in the Metro Court, Lulu Spencer (Emme Rylan) and Peter August (Wes Ramsey) talked about Lulu’ lack of progress in finding an A-List reporter for her story against Cyrus Renault (Jeff Kober).

Lulu then approached Olivia, who spilled that she went to Geneva to see Dante Falconeri (Dominick Zamprogna) and that it was a disaster. Lulu comforted Olivia.

While Lulu and Olivia were talking, Peter and Robert came face to face over near the bar. “Miss me?” Robert said, and Peter said that he had gotten used to not looking over his shoulder. “Oh, when I come for you, it will be direct,” Robert said.

Lulu rushed over and told Robert to give it a rest. Robert bashed Lulu’s objectivity as a reporter and walked off.

Suddenly, Lulu said that Robert had just given her a great idea to get their story about Cyrus off the ground. “Plus, it might have the added benefit of getting Robert off of your back,” Lulu told Peter.

Curtis followed Portia and Martin into an exam room and tried asking some sly questions, but Portia made Curtis leave.

At the Floating Rib, Harrison Chase (Josh Swickard) broke up Ned and Valenin Cassadine’s (James Patrick Stuart) altercation, and the men went inside, where Alexis Davis (Nancy Lee Grahn) had just downed a double vodka and was ordering another one at the bar.

Chase got a call from Curtis about Martin’s mugging, which Valentin overheard, and Chase and Valentin left to head to the hospital to see Martin.

Ned ended up at the bar talking with Alexis, and they had a semi-drunk conversation during which Ned disclosed that his wife was in a honeymoon suite in Monte Carlo with another man.

Alexis disclosed that she went to bed with Mr. Right and woke up with Mr. Dead. After some reminiscing about their past together and some more drinking, Ned and Alexis cozied up together and started touching and embracing.

Eventually, Alexis said it was time to go and that she needed a car. Ned said that he called for one for them both, and that they should go out and listen to some live music together.

Ned and Alexis leaned in for a kiss, and soon their car was outside waiting. “Time to go home,” Ned said. “All alone,” Alexis said, leaning in for another kiss.

Back at the hospital, Chase and Valentin arrived to see Martin. Martin disclosed that he was attacked in the Metro Court parking garage and that his briefcase was stolen.

Chase asked if there was anything of value in the briefcase, and Martin said just some legal papers and an envelope from Nelle Benson Jerome (Chloe Lanier) that was to be opened in the event of her death.

Chase was interested in that, as well as about Martin’s earlier meeting with Julian Jerome (William deVry). After Chase left, Valentin asked Martin what was in the envelope, but Martin didn’t know.

Valentin told Martin that he should be loyal, but Martin said that whatever secrets Nelle had probably went to her grave with her. “It’s time to start praying that you’re right,” Valentin said.

Elsewhere in the hospital, Portia told Curtis that he shouldn’t be asking questions about Britt, since she was appointed by Cyrus. Portia said that she was worried about Curtis, and Curtis said that he could take care of himself.

Portia noted that this is exactly what Marcus Taggert (Réal Andrews) said. Portia said that if Curtis wanted to help Trina Robinson (Sydney Mikayla), then he should stick around.

At Charlie’s Pub, Julian stood outside at the trash bins holding Nelle’s envelope. Cyrus ambled up and said that Julian had something that he wanted – the pub. Julian said he wasn’t interested in selling.

Cyrus hung around and needled Julian about being a “changed man” but soon Chase walked in and wanted to quiz Julian about where he had been around 5pm when Martin was mugged.

Cyrus stepped up and said that Julian had been with him, and that he was willing to vouch for Julian. Chase left, and Cyrus said that the least Julian could do now was to hear him out.

Cyrus sat at a table as Julian went behind the bar and opened Nelle’s letter. It turned out to be a letter to Julian saying that this was a decoy and that the real letter was still out there.

Julian wondered to himself who Nelle would have given the real letter to. “Who do you trust?” Julian wondered aloud. At Pentonville, a prison employee sorted the mail and the camera zoomed in on a letter from Nelle to Ryan Chamberlain (Jon Lindstrom).

Carly and Josslyn went upstairs to get Josslyn ready for the dance, and Nina, Jax, and Sonny remained in the living room.

Sonny glared at Jax here and there, and when Carly had returned and Nina left the room, Sonny thanked Jax for not running to the cops about Nelle. Nina soon returned to the room, cutting that conversation short.

In Geneva, Dr. Kirk (Christopher Cousins) entered Dante’s room, and Dante asked if the file with his mission in it was a joke. “The bureau doesn’t know – it’s your mission to find out,” Dr. Kirk said.

Dr. Kirk said that a lot had changed in Port Charles, and that Dante couldn’t expect to pick up where he left off. Dante flashed back to his tearful goodbye with Lulu, as she said that she’d wait forever if she had to.

Dr. Kirk oddly clicked his pen, and Dante said, “Complete the mission,” then he opened the folder showing a picture of Peter. “The question is what kind of trap is going to catch the target,” Dante said. Dr. Kirk said that some people in the bureau believed that Peter was involved in illegal activity after Cesar Faison’s (Anders Hove) death.

Viewers then saw a photo of Anna Devane (Finola Hughes) in Dante’s file as a possible person who helped Peter fake his reform. Dr. Kirk told Dante to investigate, and to ignore his preconceived notions of Anna and Peter. And with that, Dante packed his bags and left his room, presumably a free man.

Dr. Kirk returned to a room where he told someone, “It’s done. Dante has undertaken the mission.” A familiar voice replied, “Good, and he will prove my innocence and Peter’s guilt in one fell swoop.” The camera then panned to Liesl Obrecht (Kathleen Gati). “And then I’ll have my revenge,” said Liesl.

That was a great episode of General Hospital, so stay tuned to the ABC soap! We’ll give you updates as GH news comes in. Don’t forget to check CDL frequently so you don’t miss any of the latest General Hospital spoilers, daily episode recaps, or news.