General Hospital Spoilers: Will Dante Keep His Cool When He Learns Lulu Has Moved On With Dustin? 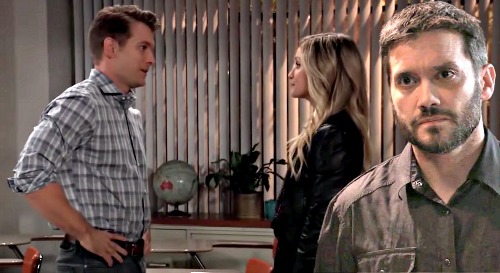 General Hospital (GH) spoilers tease that Dante Falconeri (Dominick Zamproga) will soon be on his way back to Port Charles. Even though Dante refused to see Olivia Quartermaine (Lisa LoCicero) when she arrived in Geneva to see him, in the days that followed, Dante changed his mind about wanting to go home and seeing his family again.

Dante determined that he was ready to head home, largely due to hearing the news about Mike Corbin’s (Max Gail) death, and now he’s been given a mission involving someone he knows back in Port Charles.

It’s only a matter of time before Dante goes home, but it seems that someone with some serious pull wants Dante back in Port Charles for his or her own reasons, perhaps even before Dante is psychologically ready to make the trek home.

What Dante’s mission back home will be remains to be seen, but the fact remains that he will probably still be struggling with some psychological issues related to his PTSD when he first arrives back on the Port Charles scene.

Dante passed his doctor’s test in Geneva by remaining calm and composed even when he was angry, but that doesn’t mean that it will be easy for Dante to deal with all the changes back home.

For example, Mike’s death will probably hit Dante hard when he gets home. Dante will of course feel sorrow and grief over his grandfather’s passing, and he may also feel that he wasn’t there for Sonny Corinthos (Maurice Benard) so he could feel guilty about that.

But what about seeing Lulu Spencer (Emme Rylan) again? That’s probably going to hit Dante pretty hard, especially when he learns that Lulu is in a relationship with Dustin Phillips (Mark Lawson).

Of course, Lulu will surely be happy on some levels that Dante is back. She’ll want to help Rocco Falconeri (O’Neill Monahan) forge a relationship with his dad, which could be tricky, since Rocco has started seeing Dustin as his primary male role model.

But probably the most tension will come from Dante’s realization that things between Lulu and Dustin are pretty serious, and that Lulu has moved on in her heart.

One wonders how the initial interaction between Dante and Dustin will go. If we get a totally soapy situation – for example, if Dante makes a surprise return home while Lulu is having a romantic evening with Dustin – then things could really start out on the wrong foot for the men.

Dustin seems to be a stand-up guy, and he’ll probably quickly respect the place that Dante has in Lulu and Rocco’s life, but will Dante respect Dustin?

Of course, Dante is a stand-up guy, too, but he’s also been suffering greatly from the effects of PTSD, so in many ways he’s just not himself.

And since he’ll have been released a bit earlier than Dr. Kirk (Christopher Cousins) wanted, Dante could have some residual anger issues once he’s back in Port Charles – and it would make sense on some level for him to take out his frustrations on Dustin, especially when he realizes how close Dustin and Rocco are.

We’ll see what happens here, but we could see a situation in which Dante lashes out at Dustin, at least initially. Do you think Dante will be able to keep his cool when he finds out about Lulu’s relationship with Dustin?

Stay tuned to the ABC soap and don’t forget to check CDL frequently for all the latest General Hospital spoilers, news, and daily episode recaps. We’ve got you covered!