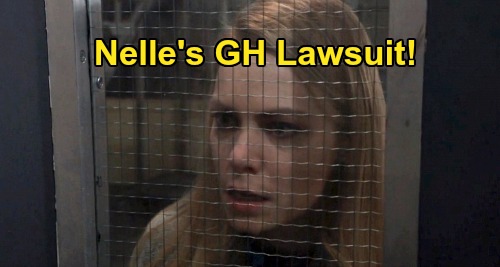 General Hospital (GH) spoilers tease that Nelle Jerome (Chloe Lanier) has some big plans in store for the hospital. As GH viewers know, Nelle’s first order of business right now is getting sole custody of her son Wiley Quartermaine Corinthos (Erik and Theo Olson), but that should get resolved pretty quickly once the show picks back up. Nelle and Michael Corinthos (Chad Duell) have just finished their courtroom testimony, and it will soon be time for the judge to render a decision.

As you might remember, in addition to filling a petition for sole custody of Wiley, Nelle also filed a lawsuit against GH. This was in connection to Wiley’s heart surgery that took place a while back.

As GH viewers will remember, Nelle refused to sign the consent form for the surgery, and as a result, Carly Corinthos (Laura Wright) locked Nelle on the roof of GH and forged her signature on the consent forms.

Nelle ended up spending the night out on the roof in the cold, and the next morning she discovered that the surgery had gone ahead with her alleged signature on the consent form.

When Nelle demanded to see the consent form, Bobbie Jones (Jacklyn Zeman) “discovered” that the consent form was missing from Wiley’s chart, and Nelle about had a fit. Carly, Michael, and Bobbie innocently insisted that Nelle had signed the form.

As it turned out, a flashback later showed that Bobbie had shredded the forged consent form after acting in cahoots with Monica Quartermaine (Leslie Charleson) to do so.

Of course, these actions open up the hospital to some considerable liability, and Nelle plans to capitalize on that. Nelle is going after GH, and she’s naming Bobbie and Monica – Wiley’s grandmothers – in the suit as well.

Well, now that Nelle has married Julian Jerome (William deVry), one wonders whether her case against the hospital will be seen as having more merit. Nelle could force Julian to back her up in the lawsuit – after all, he and Bobbie don’t get along at all, so perhaps he could testify about how Bobbie has treated him in the past, to show how she behaves toward those people she doesn’t like.

Plus, Nelle showing up for the lawsuit case with her husband and young son (assuming she gets at least partial custody of Wiley) on her arm could make her look even more like a loving mother who was so cruelly denied her rights when Carly made it impossible for her wishes to be known and when Bobbie and Monica conspired to destroy evidence of Carly’s forgery.

At any rate, it seems that Nelle’s lawsuit could seriously hurt GH. As GH viewers know, Laura Collins (Genie Francis) has commented on more than one occasion about how the hospital isn’t insured for what Nelle is claiming happened.

That could put GH at serious risk if it gets hit with a big verdict that it’s not insured for. Nelle could threaten the very ongoing existence of GH!

Do you think that Nelle will possibly put the future of GH at risk with her lawsuit? Stay tuned to the ABC soap and keep CDL bookmarked for all the latest General Hospital updates and news.