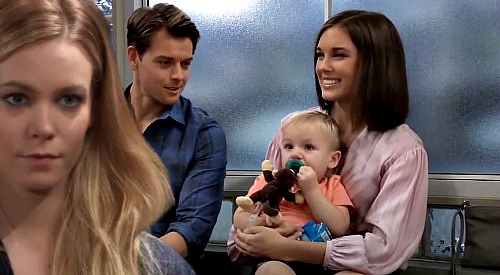 General Hospital (GH) spoilers tease that the outcome of Wiley Quartermaine-Corinthos’ (Erik and Theo Olson) custody battle will pull Willow Corinthos (Katelyn MacMullen) closer to her new husband. GH fans will recall that Willow put her lingering love for Harrison Chase (Josh Swickard) aside and chose to focus on what was best for Wiley.

Willow accepted Michael’s marriage proposal and decided she was on board with this plan of giving Wiley a stable, loving two-parent home.

There’s no doubt that Diane Miller’s (Carolyn Henessy) strategy will prove useful as we gear up for the judge’s ruling. Diane has always been clear about wanting to present a better alternative.

Willow seems like the perfect doting mother and has a solid relationship with Michael. Meanwhile, Wiley’s true bio mom is the mess who married an ex-con that’s old enough to be her father!

Nelle’s counting on Martin to pull off a win here, but the best Nelle can hope for seems to be joint custody.

After Nina Reeves (Cynthia Watros) gives her less than supportive testimony, Nelle will really be fuming. You can bet Nelle will corner Nina and let her have it over this betrayal, but what happens to Wiley?

It’s usually tough to deny a mom custody rights – and we can’t ignore the fact that Michael’s also a convicted felon and from a well-known mob family.

Michael and Willow were hoping to keep Nelle away from Wiley, but that may not be possible – at least not entirely. If Nelle winds up sharing custody with Michael, Willow and Michael will face some issues as they try to monitor the situation.

They can start by handling Nelle’s angry demand for time with Wiley on Wednesday, August 5.

That same day, Michael and Willow will strengthen their connection. Perhaps dealing with Nelle as a united front is something that’ll pull Willow and Michael even closer. They already have a great reason to bond – and that’s Wiley.

Michael suggested doing a fun activity with Willow and Wiley after the hearing was over. If they stick to that plan, it could bring the first opportunity for true “Millow” family bonding.

Nelle could easily try to rain on their parade with her demand for a visit, but Michael and Willow may hold Nelle off for as long as possible.

Willow and Michael at least need time to figure out how they’ll protect Wiley until they can appeal the judge’s ruling. Of course, there’s a chance Nelle will lose completely in court, but even that wouldn’t stop her from fighting for Wiley.

Either way, the outcome of this custody hearing is sure to rev up the war between Nelle and Michael, who’s got a whole army backing him up. That includes Michael’s new wife!

Willow will stand with Michael and could perhaps develop some strong feelings for him as they tackle Nelle difficulties together.