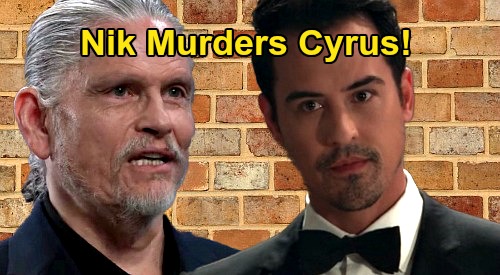 Of course, Cyrus’ main goal was going after Jordan Ashford (Briana Nicole Henry) and the other task force members who put him behind bars. Even so, Cyrus is a free man now and his war with Sonny won’t just go away. General Hospital spoilers say this battle’s set to rev up and take some deadly turns!

As the mayor, Laura is committed to protecting the people of Port Charles. Although Laura couldn’t stop Cyrus’ release, she’ll remain heavily involved in this storyline – and that’s no coincidence. There’s undoubtedly an explanation for why Laura’s a huge part of all this.

Laura may have offered a hint about where things are headed during her last conversation with Cyrus. Just before Cyrus scored his freedom, Laura suggested that he should head back to Seattle. She wanted him to be someone else’s problem, but Cyrus wondered what Laura intended to do if he stayed.

Laura pointed out that when Cyrus was inevitably killed, she would do her best to find his murderer. Naturally, Laura was trying to spark a little fear in Cyrus – or at least make sure he didn’t see her own!

The point is Laura predicted Cyrus’ murder and may indeed do just what she promised. What if Laura ends up realizing her own son is to blame for Cyrus’ death?

It could easily happen based on the clues GH has been planting. When Nikolas heard about Cyrus’ release, he was visibly shaken by the news. Nik was quick to ask Robert Scorpio (Tristan Rogers) questions – and we’re not buying his excuse about mere concern for Laura.

“Did I hear you say Cyrus Renault? The man responsible for having my mother shot?” Nikolas piped up soon after. His rattled reaction seemed to be about more than just Laura. Is Nik caught up in Cyrus’ twisted web? There could easily be a Cyrus and Cassandra Pierce (Jessica Tuck) connection here.

Nikolas was in cahoots with Cassandra, who was a drug trafficker and international criminal just like Cyrus is. It makes sense to tie Nik to Cyrus, especially since General Hospital could use an unexpected murderer. Who cares if Jason Morgan (Steve Burton) kills Cyrus? That’d be a lackluster ending after a lot of buildup.

Having Nikolas kill Cyrus would open up some new possibilities and could score him points with Sonny. We should mention that a showdown’s coming up between Sonny and Nikolas, which is further proof that Nik’s probably tied to this Cyrus storyline. They’re inserting Nik into the drama at the perfect time.

Will Nikolas kill Cyrus to protect his secrets as well as his loved ones? Cyrus is threatening Willow Tait (Katelyn MacMullen) to keep Harmony Miller (Inga Cadranel) in line. Perhaps Cyrus is threatening Spencer Cassadine (Nicolas Bechtel), too. Between Laura and Spencer, Nik would have two great reasons to kill this baddie.