General Hospital Spoilers: Nina Betrays Nelle At Wiley Custody Hearing – Bio-Daughter Revenge After Being Stabbed In The Back? 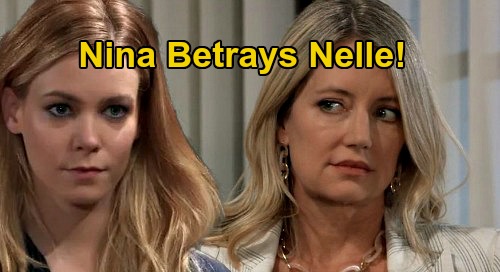 General Hospital (GH) spoilers reveal that Nina Reeves (Cynthia Watros) may become her own daughter’s target. The only surefire way to protect yourself when it comes to Nelle Benson Archer (Chloe Lanier) is to give her what she wants. As long as Nelle’s happy, she’s usually content to be a “friend.”

However, one betrayal deserves another in Nelle’s eyes – and that may be why Carly Corinthos’ (Laura Wright) uttered a hint that could be important. Carly rant into Nelle as she was exiting Crimson, so these enemies proceeded to trade barbs. Before Carly left, she insisted Nelle would betray Nina just like she had everyone else.

Of course, Nelle wouldn’t do that without a good reason. Nina is Nelle’s only ally right now, so she wouldn’t risk alienating the one person who could help her. If Carly’s prediction is coming true, then Nina will have to betray Nelle first. Otherwise, Nelle would just be ruining the good thing she’s got going.

It makes sense that Nina will change her mind and support Michael Corinthos (Chad Duell) at the custody hearing. Nina may even trash Nelle’s character in some way, which would leave Nelle furious.

General Hospital spoilers say Nina will be one of a couple people who play crucial roles in the judge’s decision. The other will likely be Michael’s new bride, Willow Tait (Katelyn MacMullen).

Ever since Nelle got out of prison, she’s been focused on her goal of raising Wiley Quartermaine-Corinthos (Erik and Theo Olson) herself. Can you imagine how enraged Nelle will be if she’s denied any custody rights at all?

Nelle might get some measly visits, but that’s not what she wants. She’d prefer sole custody, but she at least wants shared custody out of this.

If Michael emerges victorious and succeeds in pushing Nelle out of the picture, Nelle may blame Nina in the aftermath. She’d feel like Nina stabbed her in the back! It’s the logical story path since Nelle is Nina’s biological daughter.

As we build to that necklace reveal, General Hospital will likely want to create a fierce war – or at least make Nelle hate Nina’s guts.

After Nelle learns she’s Nina’s bio daughter, she may loathe Mommy Dearest even more. Nelle can start plotting her revenge one way or another. GH viewers will recall how Nelle put on a sweet act with Carly all while targeting her.

Nelle might take a similar route with her new mom – or she could just make Nina suffer by rejecting her completely.

There may even be some other sneaky strategy Nelle has in mind as payback. After Nina defended Nelle to Carly, Nelle eavesdropped and thanked Nina for standing up for her. Nina told Nelle not to make her regret it, but it sounds like that’s another clue about what’s ahead!