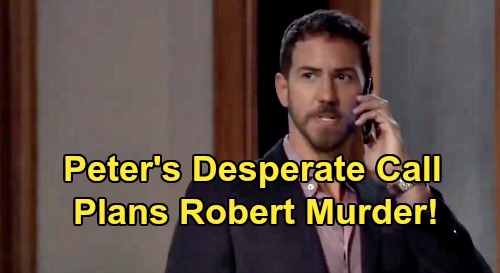 General Hospital (GH) spoilers tease that Peter August (Wes Ramsey) will realize his plan is in jeopardy. GH fans know Peter needed a scapegoat, so he pinned all his crimes on Liesl Obrecht (Kathleen Gati). However, Robert Scorpio (Tristan Rogers) just isn’t convinced that Peter’s innocent – and that could lead to big trouble if Peter doesn’t do something about the threat!

Peter assured Anna Devane (Finola Hughes) that he’d do everything in his power to keep what he has. There’s no way Peter’s going to let Robert derail his scheme without a fight. Peter’s proven that when an issue arises, he can make a phone call and eliminate his latest obstacle. That’s exactly what Peter will try to do when he calls someone and insists, “Scorpio may still be a problem.”

Peter will make this phone call on April 14, so this will happen right around the time Violet Barnes’ (Jophielle Love) birthday party kicks off. Robert and Peter will both be guests, which means there should be some tense moments. Of course, there’ll also be moments to eavesdrop – like when Anna and Robert spar over whether Peter’s innocent or guilty.

Anna will just want Robert to let this go and accept the proof against Liesl, but Robert will want justice to prevail. This could be what convinces Peter to make a desperate move.

General Hospital spoilers say Peter will want to give Robert a distraction, but that could just be part one of his plan. If Peter can find success with a less than deadly strategy, that’s the one he’ll want to use first.

Nevertheless, Peter knows Robert can be awfully persistent. There may be a backup plan that comes into play – one that could bring grave danger for Robert. Since Peter was willing to order a hit on Drew Cain (Billy Miller), will he order one on Robert, too?

Peter also called for Andre Maddox (Anthony Montgomery) and Franco Baldwin’s (Roger Howarth) murders before he changed his mind. Just because Peter swooped in as a “hero” doesn’t excuse the fact that he ordered the hits in the first place.

We can’t forget Andre nearly died from a separate stabbing attempt either. The point is Peter has made deadly decisions and just might make another one.

Will Peter call for Robert’s murder if he exhausts all other options? Will Robert’s digging put his own life at risk? As other GH news rolls in, we’ll have other updates to pass along.