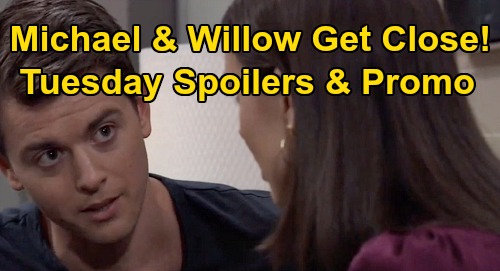 General Hospital (GH) spoilers for Tuesday, April 14, tease that Harrison Chase (Josh Swickard) will open up to Sasha Gilmore (Sofia Mattsson). Chase will insist that Willow Tait (Katelyn MacMullen) is the love of his life, so Sasha may think Chase needs to prove it. GH fans know Sasha’s hung up on the idea of Michael Corinthos (Chad Duell) marrying Willow, which could boost his custody chances significantly.

As much as Chase hates the thought of it, he understands how important Wiley Quartermaine-Corinthos (Erik and Theo Olson) is to Willow. At some point this week, Chase and Sasha will come up with a drastic plan. Michael and Willow won’t move forward with this marriage unless they get a push, so Sasha and Chase will have to give them a painful one.

In the meantime, Michael will assure Willow that she’s what’s best for Wiley. Although they won’t be locking in wedding details just yet, Michael will want Willow to know she’s a crucial part of Wiley’s life. General Hospital spoilers say Willow and Michael will share a tender moment as they bond over Wiley’s future.

Over with Lulu Spencer (Emme Rylan), she’ll warn Maxie Jones (Kirsten Storms) that she can’t get involved with Valentin Cassadine (James Patrick Stuart). Now that Valentin’s tied to Deception, Lulu won’t want Maxie anywhere near it. Trouble follows Valentin everywhere he goes, so Lulu will want Maxie to back out before she gets caught in a mess.

However, Maxie needs this job and has no intention of letting Valentin scare her away. Despite Lulu’s warning, Maxie should make it clear that she can handle herself. While Maxie deals with Lulu, Valentin will deal with Nelle Benson Archer (Chloe Lanier). They’ll have a run-in that leaves Valentin wondering what Nelle wants.

During this tense conversation, Nelle will make some comments that leave Valentin somewhat disgusted. Valentin will think Wiley is a pawn to Nelle and nothing more. Of course, Valentin adores Charlotte Cassadine (Scarlett Fernandez), so he won’t feel like he can relate to Nelle in this particular area.

When Nelle realizes her ally could become an enemy, she’ll deliver a warning. Nelle will insist that Valentin had better not cross her, so it sounds like Nelle’s really got some guts!

Across town, General Hospital spoilers say Anna Devane (Finola Hughes) will get fed up with Robert Scorpio (Tristan Rogers). Robert still believes Peter August (Wes Ramsey) is guilty, but Anna will try to convince him to back off.

Anna will push Robert to just let the culprit be Liesl Obrecht (Kathleen Gati) and let this whole thing be over. Naturally, Robert will think that means letting Peter get away with it, too! That’s something Robert won’t be willing to do, so Peter will be on edge in Tuesday’s episode.

General Hospital spoilers say Peter will make a phone call in an attempt to handle all this. He’ll tell someone that Scorpio may still be a problem. Peter will hope to give Robert a distraction that’ll take his attention away from this case entirely, but he’ll just be delaying the inevitable. It’s just a matter of time until Peter’s secrets explode!

Until then, Peter will keep manipulating Maxie as Hamilton Finn (Michael Easton) prepares for a birthday bash. Violet Barnes’ (Jophielle Love) party will bring some bombshells later this week, so stay tuned for all the drama. As other GH news emerges, we’ll pass along more updates.

It sounds like the excitement’s about to rev up in Port Charles. Do you think Peter can ever find redemption again? CDL’s the place to be for hot General Hospital spoilers, updates and news, so be sure to check back frequently.

“This has everything to do with Wiley!” #GH pic.twitter.com/i0YNCfESx6