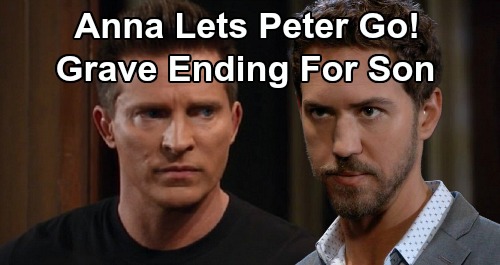 General Hospital (GH) spoilers tease that Peter August (Wes Ramsey) is headed for trouble. GH fans know Anna Devane (Finola Hughes) decided to remove the incriminating info from Peter’s file. However, that doesn’t mean Peter’s going to get away with his actions.

Between Hamilton Finn’s (Michael Easton) looming betrayal and “JaSam’s” determination, a downfall is clearly brewing. Of course, Peter pointed out that he was most worried about Jason Morgan (Steve Burton) – as well he should be!

Jason has proven that he’s a force to be reckoned with, especially when his loved ones are involved. He’s already warned that he won’t hesitate to take Peter out if this threat gets out of hand.

Is there a chance Jason will indeed kill Peter? Could Peter die some other way? Time will tell, but there was a troubling clue in Peter’s recent conversation with Anna. Peter may have foreshadowed his own grim fate! The scene got awfully emotional and appeared to be a setup for something significant.

Peter made it clear that he didn’t want Anna getting caught up in a dangerous mess. He urged Anna to promise that if it came down to it, she would let him go. Anna couldn’t make that promise since she let Peter go once and now refuses to do it again.

However, we have to consider what GH writers were going for there. Are they setting up a scenario where Anna will have to let Peter go – just as he predicted? If so, there are several ways to let go. One is allowing Peter to land in prison for his crimes. Another is letting him or perhaps even helping with a quick getaway.

Still, the most dramatic option would be a fatal one. General Hospital spoilers say the walls will close in on Peter eventually. It’s easy to imagine all this spiraling out of control. Will Peter suffer a deadly fate like his father, Cesar Faison (Anders Hove)? Will Anna have to let Peter go right down to the grave?