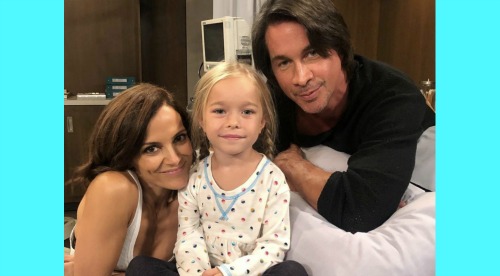 General Hospital (GH) spoilers reveal that there are always characters coming and going on the ABC soap. However, some of them really deserve to stick around – especially the ones with family ties in Port Charles and plenty of chemistry with costars. Hayden Barnes (Rebecca Budig) is certainly missed, so many GH fans are calling for her return.

For starters, it was heartbreaking to watch Hayden leave her beloved daughter behind. That’s especially true since it was just so unnecessary. There was no real danger, so Hayden was forced to abandon Violet Barnes (Jophielle Love) for no reason.

Nikolas Cassadine (Marcus Coloma) is to blame for that, so it makes him look terrible. He’s responsible for both Hayden and Violet’s suffering.

Violet needs to be reunited with her mom, but that’s not the only reunion that needs to happen. There are definitely lots of “Fayden” fans, too.

Hayden and Hamilton Finn (Michael Easton) were great together – particularly in their adorable scenes with Violet. They all could’ve become a happy family eventually.

It’s true that Hayden made mistakes and hurt Finn, but that’s only because GH writers keep giving her awful exits! General Hospital needs to lock Budig into a long-term contract instead and let her focus on her future in Port Charles.

It’d be nice to see Hayden build on her connection with Elizabeth Baldwin (Rebecca Herbst) as well. They were finally starting to form a real bond as sisters before Hayden was forced out of town. There’s a ton of potential with Hayden, so she deserves to reclaim her spot in PC.

On Twitter, you’ll find loads of tweets demanding Hayden’s return. “I want Hayden back in Port Charles for Finn,” insisted one General Hospital viewer. “Let them have their family…”

Another GH fan said, “I need Hayden back on the canvas, I want to see more of her with her adorable little daughter!”

“I love seeing her as a mother,” said one more fan about Hayden. “As a sister to Liz, an aunt to the boys. There was so much to do with this character. I hope she’s back soon.”