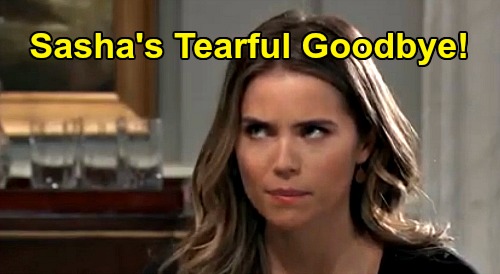 General Hospital (GH) spoilers tease that Sasha Gilmore (Sofia Mattsson) will do her best to console Michael Corinthos (Chad Duell). Michael may find himself upset for more than one reason during the week of April 6-10. Ever since Nelle Benson Archer (Chloe Lanier) was released from prison, she’s caused big trouble for the Corinthos clan. There’s only going to be more trouble as time goes on.

Of course, we’re not absolving Carly Corinthos (Laura Wright) or the other schemers in this scenario. Wiley Quartermaine-Corinthos (Erik and Theo Olson) needed surgery, but Nelle was adamant that she didn’t want to take the risk. Under the circumstances, this mom had a right to feel the way she felt.

Nelle brought up her own experience with having surgery at a very young age and experiencing chronic kidney issues as a result. It seemed like a rare moment of genuine concern from Nelle. Unfortunately, Nelle snapped back to her usual selfish self later, but Carly’s no better.

Like it or not, Nelle has parental rights. It was completely outrageous for Carly to leave Nelle on the roof and forge her rival’s signature. Let’s hope Nelle can still find a way to use that to her advantage in court – if only for drama’s sake! That could be one of the reasons Sasha’s set to comfort Michael, who’ll undoubtedly worry about Nelle getting full custody.

The last thing they need to be doing is giving Nelle more ammo, but Carly just can’t help herself. She could be hurting more than she’s helping – at least in terms of Michael’s long-term strategy.

Now that Wiley’s going to need another surgery in six months, the clock is ticking and Michael needs to step up his game. He wants to ensure a victory in court, so Sasha’s comfort may come in there, too.

Will Michael feel backed into a corner? As Nelle fights back in a big way, Michael may feel like is only option is to marry Willow Tait (Katelyn MacMullen). Sasha has already indicated that she’d be OK with that. In fact, it was Sasha’s idea!

Even so, Michael would hate to break Sasha’s heart as well as his own. It sounds like we could be gearing up for Michael and Sasha’s tearful goodbye. This marriage to Willow would be a marriage of convenience, but they’d still have to live together and keep up a family appearance.

There’s no room for Sasha or Harrison Chase (Josh Swickard) in this happy little fam. What will Sasha do since it indeed looks like this Michael and Willow wedding will happen? Will Sasha decide to make some updates to her own life as well?

Sasha could end up finding love with someone else, especially since Michael will probably fall for Willow. There’s also a chance Sasha will be too heartbroken to stick around. Since General Hospital has brought up Italy a several times in Sasha’s scenes, she might move there for some Deception projects.