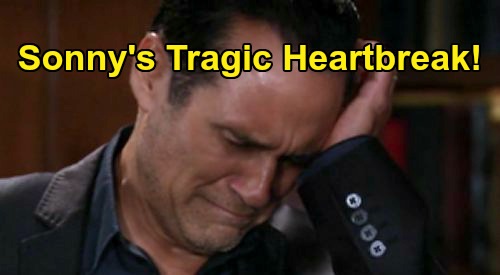 General Hospital (GH) spoilers tease that Sonny Corinthos (Maurice Benard) is headed for some serious heartbreak in the days to come. As GH viewers know, Sonny has been resisting the idea of getting a DNR for Mike Corbin (Max Gail), even though Mike’s condition has taken a serious downturn as of late. Mike is seen mostly catatonic these days, and his body is steadily forgetting how to do even the most basic things, such as eating and walking.

It’s terribly heartbreaking, yet Sonny keeps insisting that his dad is still “in there” and should be medically saved in the event his health takes a sudden decline. Sonny just isn’t psychologically ready to let his dad go, and it’s sad to watch him struggle with accepting the reality of the situation.

Well, according to GH spoilers, Sonny will soon find himself in absolute agony, which indicates that something could happen with Mike. It seems that Mike is really nearing the end, so we could see a sudden death.

That would certainly rock Sonny and cause him agony, or we could see Mike suffer a sudden life-threatening health crisis, with a decision needing to be made whether to take medical measures to save him.

There’s another possibility here as well – Sonny’s agony could have something to do with his son Dante Falconeri (Dominick Zamprogna), given that GH spoilers say that Olivia Quartermaine (Lisa LoCicero) will be upset at the same time Sonny is in distress.

There have been a lot of on-screen mentions of Dante over the past couple of weeks, particularly about him not improving while in WSB custody.

It’s a terrible thought, but something could happen to Dante that will cause both Sonny and Olivia to be distraught. Dante has been violent previously while in custody, so he could do something to harm himself or someone else, or it’s possible that he could somehow escape custody and go on the run. Since Dante’s suffering from PTSD, he could be paranoid and want to flee.

Of course, it’s always possible that Sonny will be hit from both sides, and that Mike will have a crisis while something happens with Dante at the same time. This, combined with all the pressure that Sonny is feeling from Cyrus Renault (Jeff Kober), would be a lot for Sonny to handle, and we could see a serious stress response from the mob boss.

We’ll see what happens here, but it seems like the drama is building to something big going down – something that Sonny can’t control and that will test his coping mechanisms. And given that Mike is in such bad shape and Dante’s name keeps coming up on the show, we could be looking at a double whammy for Sonny.

Do you think that Sonny will face bad news about both Mike and Dante? Stick with General Hospital and keep CDL bookmarked for the latest GH updates. We’ve got your latest soap news and spoilers, so stick with us!