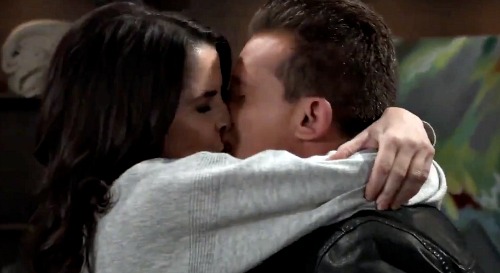 General Hospital (GH) spoilers reveal that “JaSam” fans are holding out hope that their luck will turn around. After all, the bad guys can’t keep winning forever, right? Peter August (Wes Ramsey) has been making some sneaky moves to avoid getting caught – moves that are costing Jason Morgan (Steve Burton) and Sam McCall (Kelly Monaco) big time.

However, Peter is clearly headed for a major downfall sooner or later. It’s only a matter of time until Peter’s exposed. Peter’s been happily enjoying his life with Maxie Jones (Kirsten Storms), but that relationship will inevitably be torn apart. On the flip side, it’s only fair that Jason and Sam get their chance to finally come together.

Could happiness FINALLY be around the corner for Jason and Sam? “JaSam” fans have certainly been patient since Steve Burton returned to his popular role as Jason Morgan on ABC’s General Hospital. This duo’s supporters still haven’t had a solid stretch of bliss for their favorite couple, so they’re definitely due for it.

Jason and Sam lovers are always hoping for some positive updates in all the General Hospital spoilers and news. A “JaSam” 2020 wedding would exactly what fans would like to see, and apparently, so would Jason Morgan’s real-life actor!

Steve Burton himself even retweeted an adorable “JaSam” clip recently. GH viewers will recall that Sam and Jason managed to steal a little time with each other on a recent episode.

Sam set up a secret meeting with Hamilton Finn (Michael Easton), so Jason showed up before Finn arrived and scored some passionate kisses from Sam. She wanted to savor every last second with Jason – and it’s easy to see Jason felt the same way.

Although Sam and Jason have now faced a setback, some victories are undoubtedly brewing. General Hospital spoilers say they’ll fight with everything they’ve got. Jason and Sam won’t let the obstacles keep them having from the future they want. Could that future include a 2020 “JaSam” wedding?

It just might since they’ve already been through so much just to be together. Once Sam and Jason actually get their shot, they may want to take full advantage of it. What better way to celebrate their love than with some beautiful nuptials?

Jason and Sam deserve the opportunity to tie the knot again and be a united family with Danny Morgan (Porter Fasullo) and Scout Cain (Ella Ramacieri).

General Hospital spoilers say some exciting twists and turns are coming up in “JaSam’s” story. Let’s hope a wedding’s waiting at the end of all this! Don’t miss what’s in store and be sure to pop in CDL frequently for some great news and updates.