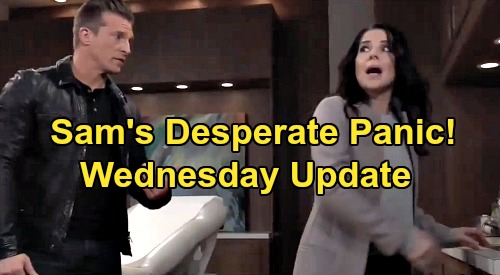 General Hospital (GH) spoilers update for Wednesday, February 12, teases that Valentin Cassadine (James Patrick Stuart) will focus on his goal – or at least one of them! Valentin has been making some strategic moves lately with the help of Martin Gray (Michael E. Knight). However, it’s time for the final push now. Valentin needs a majority holding if he wants to take over ELQ, so he’ll push Martin to intensify his efforts.

Over with Nina Reeves (Cynthia Watros), she’ll drop by the gallery and catch up with Ava Jerome (Maura West). After Nina hears how things are going in Ava’s new marriage, she’ll tackle Ava’s concerns about Valentin.

Maxie may not see why two consenting adults with a spark shouldn’t go for it, but Jax decided friendship was for the best. We’ll see how Jax feels after Maxie works her magic.

Meanwhile, Peter August (Wes Ramsey) will find someone in need of support. Emma Scorpio Drake (Brooklyn Rae Silzer) may be a bit bummed over her grandparents’ feud.

Emma didn’t seem all that bothered by Anna Devane (Finola Hughes) and Robert Scorpio’s (Tristan Rogers) sparring before, but this probably isn’t the perfect visit she had in mind. There’s too much fighting at home!

No matter what’s on Emma’s mind, Peter should come through for her. They’ll connect in Wednesday’s episode, which continues to weave a tangled web for Peter.

At GH, Sam McCall (Kelly Monaco) and Jason Morgan (Steve Burton) will still be reeling over Robert’s bombshell. He just revealed that the deal’s off, so their plan to be together just went up in smoke.

It looks like Peter’s phone call is the reason why, but a distraught Sam will hold herself responsible. She’ll remind Jason that she brought Hamilton Finn (Michael Easton) into this, so she’ll view herself as the reason the deal crumbled.

Jason will try to offer Sam another perspective, but he may not get her to see the light. This is certainly distressing news for “JaSam” since they’ve been working so hard on this plan.

Finally, General Hospital spoilers say Anna will interrogate Finn. He seems she may get updates on Finn’s decision to stab her in the back, so she’ll ask who’s side he’s really on. Anna won’t understand how Finn could do something like this, especially when he knows how much Peter means to her.

Of course, Finn may argue that Violet Barnes (Jophielle Love) means just as much to him. Anna means a great deal Finn as well, so he can’t stand by and watch Peter get away with his sinister behavior. Finn has no way of predicting what Peter might do next!

General Hospital fans know Peter’s trouble, so it’s just a matter of time until his secrets are front-page news. Stay tuned to see Peter’s inevitable downfall and don’t miss our updates on all the chaos ahead.