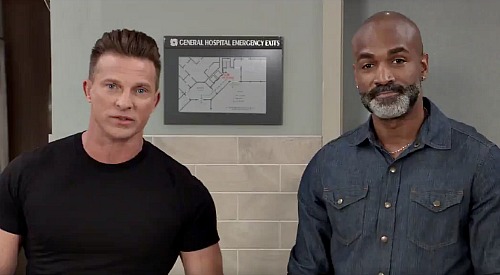 General Hospital (GH) spoilers tease that something big and shocking is coming on the all-new episode of GH that will air on Monday, August 3rd. As you’re probably aware, GH is coming back on Monday with the first of its all-new GH episodes since the coronavirus pandemic shut down production.

This is great news for GH fans, and it looks like everyone involved in the process – actors, crew, executive producers – are excited about the development.

Well, GH’s executive producer Frank Valentini was recently interviewed by a local ABC news affiliate and he gave the scoop on the show going back into production.

As it turns out, GH is the first of ABC’s scripted dramas to get back on the air, so it’s a pretty big deal. Frank said that everyone was thrilled to get back to the set after four months away.

Frank talked about how the show obviously has more safety protocols in place now, including ongoing COVID-19 testing and limited physical intimacy in scenes.

But perhaps the most interesting thing he said was this: “The very first few seconds of the show, I think, will blow a lot of the audience’s mind because there’s a big surprise that we inserted in.”

A big surprise – what could it be? Well, Frank wasn’t the only one to tease the big surprise. GH has released a new teaser promo featuring Steve Burton (Jason Morgan) and Donnell Turner (Curtis Ashford) that also addresses the big surprise that’s coming on Monday, August 3rd.

The promo starts out with Donnell quickly addressing fans, then Steve says, “We’re here with a very important message about tomorrow’s all-new episode of General Hospital.”

Donnell tells fans not to miss the first 5 minutes of the show, and Steve says, “Yeah, don’t DVR it, don’t wait for later. Watch it live, or risk being spoiled.” Donnell finishes off saying, “Can’t say we didn’t warn you!”

One wonders if a big return is coming on the first few moments of GH. There are several possibilities here, including Luke Spencer (Anthony Geary), Holly Sutton (Emma Samms), and Lucky Spencer (Jonathan Jackson), since they’ve were heavily discussed in episodes leading up to the shutdown.

Could we see a return of one of these characters? Or will Dante Falconeri (Dominick Zamprogna) make his big return on Monday?

Another possibility here is that the return could be Marcus Taggert (Réal Andrews), who could very well be alive and easy inserted into the episode, perhaps talking on the phone with Jordan Ashford (Briana Nicole Henry) or in some other quick scene.

Of course, the big surprise might not be a return at all – it could be some major action on a key storyline front. We’ll have to tune in on Monday to see!

Are you looking forwarding to having GH back on Monday? Stay tuned to the ABC soap and don’t forget to check CDL often for the latest General Hospital spoilers, daily episode recaps, and news.

You wouldn’t want to let Stone Cold or Curtis down, would you? @1SteveBurton @donnellturner1 #GH pic.twitter.com/xwifeX1SIe