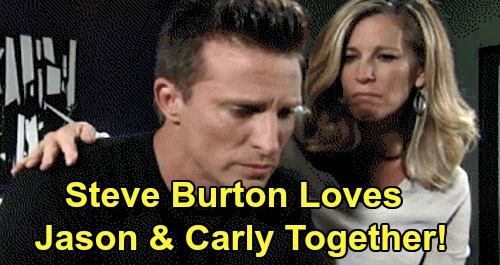 General Hospital (GH) spoilers reveal that Steve Burton (Jason Morgan) recently had some fun on social media. Although GH has suspended production until the COVID-19 aka coronavirus crisis dies down, they currently still have episodes left to air. In fact, the show may have done some crafty editing to add one more!

GH had been promoting a special episode that would focus on Carly Corinthos’ (Laura Wright) past and complex relationships – particularly her relationship with Nelle Benson Archer (Chloe Lanier). General Hospital was supposed to deliver a big reveal at the end of this episode, but that’s not exactly how it played out.

Instead, this turned out to be a two-day event that included the big reveal in the second episode. Of course, we’re talking about the revelation that Nelle is Nina Reeves’ (Cynthia Watros) biological child.

GH fans noticed a TON of flashbacks in those two episodes, so it seems the show may have added in a few more to stretch things and give them another episode to use during the pandemic.

For example, there was one part where Carly reflected on her relationship with her bestie, Jason. General Hospital included several sweet Carly and Jason moments instead of just one, so maybe there was some padding there.

Regardless, those flashbacks were certainly some meaningful scenes – especially the scene where Carly greeted Jason after his return from the Russian clinic.

That brings us to Burton’s recent social media activity! Like many other cast members, Burton’s been keeping up with his Twitter followers and offering some great content while most of us are stuck at home.

After one General Hospital fan posted the Jason and Carly flashback clips, she tagged Burton and Wright in a post about how much she loved them. Burton shared the tweet and said, “Me too! Just don’t tell sonny.” Steve Burton included a couple of rolling on the floor laughing emojis and even got a reply from Wright, who wanted to join in on the conversation.

However, Carly really does love Sonny and Jason adores Sam McCally (Kelly Monaco). Jason and Carly have an incredible connection that’s hard to beat, but it’s definitely platonic. Even so, it’s nice to see Burton joking around and interacting with fans!