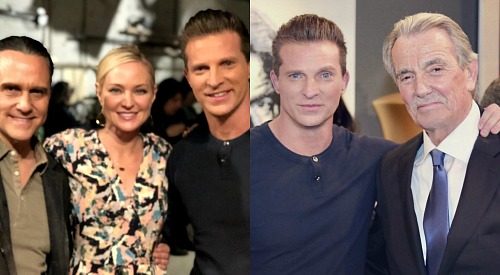 General Hospital spoilers has some fun news to pass on about a big celebration that recently took place on The Young and the Restless set. Steve Burton (Jason Morgan) and Maurice Benard (Sonny Corinthos) helped Eric Braden, who portrays Victor Newman on the CBS soap, celebrate 40 years on the show. This is an amazing accomplishment and both Eric Braeden and Victor Newman are daytime icons.

The Young and the Restless is planning a three-episode event during which viewers will be treated to various flashback clips from Eric’s four decades on the show. This will take place during a gala that Nikki Newman (Melody Thomas Scott) will throw in honor of Newman Enterprises’ 50th anniversary.

The various members of the Newman clan and their friends will gather for the glitzy gala, during which both Victor and his company will be celebrated. There will be some nice returns for the event as well, including his grandson Noah Newman (Robert Adamson), his brother Matt Miller (Robert Parucha), and his ex-wife Julia Newman (Meg Bennett).

Those three special episodes are currently scheduled to air on Tuesday, February 18 through Thursday, February 20, so be sure to tune in for this amazing event.

Well, in addition to the formal on-screen celebration of Newman Enterprises’ 50th anniversary and the tribute to Victor, the cast of Y&R got some celebration time in behind the scenes, as the show apparently hosted a get-together for Eric Braden, his co-stars, and some GH stars who attended the get-together as well.

Sharon Case, who portrays Sharon Newman on Y&R, shared a photo of herself with two of General Hospital’s biggest star, Maurice Benard (Sonny Corinthos, GH) and Steve Burton (Jason Morgan, GH), at the get-together. They’re all smiling big and looking happy, and Sharon wished a happy 40th to Eric Braden in the caption.

Maurice Benard shared a video on his Instagram Stories from the party as well. In the video, Maurice says, “All right, so ere we are, hanging out at Eric Braeden’s 40th Anniversary. Great Guy.” Maurice then points to Steve, who’s standing nearby, and Sharon says, “it’s Dylan!” They all laugh about that before the video ends.

Of course, Sharon was referring to Steve’s alter-ego on Y&R – Dylan McEvoy, which he played from 2013-2017. Dylan is Nikki and Paul Williams’ (Doug Davidson) son and was married to Sharon Newman for two years on the show.

Steve Burton tweeted a photo from behind the scenes at the party for Eric as well. The photo he chose is a nice closeup of Steve and Eric along with the following caption: “Happy 40th @EBraeden…an honor to join you on a monumental day! Thanks for the invite. Appreciate ya. #legend #gh #yr.”

It looks like everyone had a great time at the gathering for Eric, and Y&R fans can look forward to the three-episode extravaganza that will celebrate Victor Newman and the 50th Anniversary of Newman Enterprises. Stay tuned to the CBS soap and don’t forget to check CDL often for the latest Young and the Restless spoilers, updates, and news.

Happy 40th @EBraeden .. an honor to join you on a monumental day! Thanks for the invite. Appreciate ya.. #legend #gh #yr pic.twitter.com/WQp0G82oeV