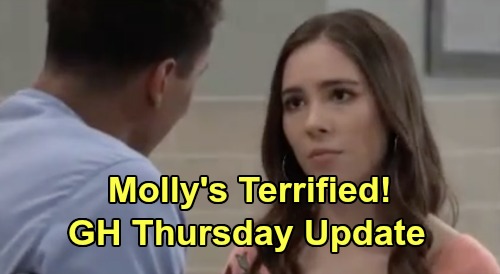 Liz also mentioned that Mike could use a DNR. As Mike’s death draws near, it’s important for Sonny to be prepared. Sadly, Sonny is struggling to face the facts. He’ll remain in denial about what’s necessary as he opens up to Carly about this DNR, which she’ll apparently side with Liz on. Sonny will ask if Carly just wants him to let his father die.

Of course, no one wants that, but Sonny can’t change the circumstances. Mike’s in the very late stages of Alzheimer’s, so there’s nothing anyone can do now. Sonny will confide in Jason Morgan (Steve Burton) next, which will bring another opportunity for guidance. Jason can’t tell Sonny how to proceed, but he can console Sonny somewhat and perhaps argue that Liz had the right idea.

Across town, General Hospital spoilers say Lulu Spencer (Emme Rylan) will get an unexpected phone call. Will Cyrus Renault (Jeff Kober) be on the other end? Regardless, Lulu will have a meeting with Cyrus at the Metro Court. Cyrus may not tell Lulu who he is when he arranges this appointment. He might claim this is about some business with The Invader, but there could be more to the story.

Laura Collins (Genie Francis) will show up and suggest that Cyrus was careless. Cyrus won’t have done his research according to Laura, but Laura’s definitely done research on him.

Naturally, Laura could be underestimating Cyrus here. Cyrus seems like the kind of guy who’d know all about Laura and Lulu’s connection. It’s entirely possible Cyrus is messing with the mayor’s daughter as part of a plan.

Speaking of plan, Jordan Ashford (Briana Nicole Henry) will think she knows what Cyrus is cooking up next. Curtis Ashford (Donnell Turner) will get updates on that as well as a decision Jordan’s mulling over. Jordan will think it might be time for her to resign – and there could be some crucial reasons why.

For starters, Jordan may think it’d convince Cyrus to back off a bit. Cyrus would be lulled into a false sense of security as well. Plus, Jordan might feel better about breaking the law if she weren’t the police commissioner. Being a dirty cop isn’t what Jordan wants, so she could ditch the cop part and keep the dirty! It might free Jordan up to go all in on taking Cyrus down.

Curtis probably won’t think Jordan should quit her job, so he could offer up some good reasons for her to stay. Jordan is in a position of power – and power is what’s needed to sink Cyrus. She’s got resources she wouldn’t have if she gave up her role as the commish.

Meanwhile, Alexis Davis (Nancy Lee Grahn) and Neil Byrne (Joe Flanigan) will discuss their future. How long are they going to keep dancing around how they feel? It turns out not for much longer! Neil and Alexis will talk about what’s next for them – and what’s next is becoming a couple. The steps to make that happen will be complicated and costly, so stay tuned for major May sweeps drama.

Other General Hospital spoilers say TJ Ashford (Tajh Bellow) will rev up the romance and impress Molly Lansing-Davis (Haley Pullos). Molly will act like their relationship’s on solid ground, but it’s not really – not when Molly’s keeping such a huge secret from TJ.

GH viewers know Molly and Brando Corbin (Johnny Wactor) are hiding a hookup, but Molly hopes TJ will never find out about that terrible mistake. Even so, Molly will be pretty terrified about this secret getting out and blowing everything up.

As for Brando, he’ll irritate Kristina Corinthos (Lexi Ainsworth) – and Sam McCall (Kelly Monaco) won’t be too happy with him either. Brando will eventually apologize to Kristina, but Sam and Krissy may hold a grudge.

Molly will divulge her hookup secret to Kristina and Sam in the coming episodes, so that news won’t do any favors for Brando’s reputation. Sam and Kristina are bound to think Brando took advantage of Molly, who was feeling vulnerable that night. Molly was a willing participant though, so she’s stuck in a mess that’s only going to get messier.