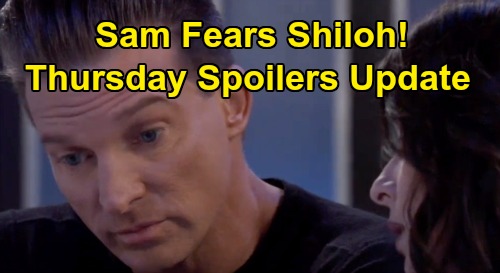 It’s perplexing since Willow hated Shiloh’s guts and went up against him in court. As for Sam, she’s the one who sent Shiloh to an early grave!

Naturally, that’s exactly where Sam will want Shiloh to remain. Thursday’s GH preview video shows Sam saying, “If anyone needs to stay dead and buried…” We can assume Sam will finish the sentence with “it’s Shiloh.” Unfortunately, Shiloh’s followers have become Jason and Sam’s latest concern.

Jason’s worried that somebody out there may want vengeance, so he’s definitely got a motive to look into this. Damian Spinelli (Bradford Anderson) might be on the case soon. Jason will need to cover this from every angle and hopefully prevent any sneak attacks on Sam – or Willow for that matter. He doesn’t want Shiloh to cause pain from beyond the grave, but that may be unavoidable.

Over with Carly Corinthos (Laura Wright), she’ll try to keep Sonny Corinthos (Maurice Benard) calm and in charge of his emotions. Carly will insist that when Sonny hears her secret, he shouldn’t lash out and make things worse.

General Hospital spoilers say Carly will divulge how she went to Jasper “Jax” Jacks’ (Ingo Rademacher) house after Halloween. She hoped to grill Jax about why didn’t want Josslyn Jacks (Eden McCoy) to move in, but she ended up getting a huge shock instead.

Carly will assure Sonny that Nikolas Cassadine (Marcus Coloma) is back from the “dead.” She’ll reveal that Nik’s alive and well, so Sonny will get the full scoop. After Sonny hears that Jax has been helping Nikolas, he’ll mention that it’s a crime. Nik is a fugitive, so Jax could get in big trouble if Sonny turns him in.

However, going to the cops could lead to Jax’s retaliation. GH fans know Jax is in the loop on Dev Cerci’s (Ashton Arbab) dilemma and everything Sonny’s done to keep him in the country. One betrayal deserves another, so Carly may bring that up and remind Sonny of what’s at stake.

If Sonny gets Jax deported, Jax could get Dev deported as well. Not to mention Joss would be furious over both deportations! Sonny would be making a mess, so he needs to cool it and leave the authorities out of this.

General Hospital spoilers say Nina will have a realization after these results. She’ll feel like Valentin is incapable of giving her the honesty she needs and loving her the way he should love her. Nina will be fed up with all the lies, so she’ll decide she’s officially done with Valentin.

That’s when Sasha will come along and try to change Nina’s mind. Nina will admit she realizes Sasha covered for Valentin. Sasha will wonder how long Nina’s known she wasn’t acting alone, so Nina may suggest she knew it all along – at least deep down. Nina never really bought Sasha’s lie since this scheme had Valentin written all over it.

Nevertheless, Sasha will step up for Valentin’s sake as well as Nina and Charlotte Cassadine’s (Scarlett Fernandez). Sasha won’t want Nina to throw away her blissful family over a mistake Valentin made – especially one that was only meant to make Nina happy.

Nina will have to determine Valentin’s wedding fate sometime between now and right before her vows.

As for Charlotte, she’ll get a gentle lecture from Laura Webber (Genie Francis). Laura will try to make Charlotte understand that her secret bodyguard isn’t real and couldn’t have been the man in the photo. She’ll likely explain that the guy in the pic is actually her deceased uncle, Nik.

Charlotte just won’t think that’s possible since she’s seen and spoken to her secret bodyguard more than once. She may guess that the man simply looks like Nikolas or something along those lines. Regardless, Charlotte should be pretty persistent about this secret bodyguard existing – and she should be!

General Hospital viewers have seen Nik interact with Charlotte, too. He absolutely exists, so Charlotte will be proven right soon enough. It appears the long-awaited Nikolas reveal is coming up at Valentin and Nina’s nuptials, but Valentin will tackle a different problem first.

After eavesdropping on Ava Jerome (Maura West), Valentin now believes the codicil to his father’s will still exists. He’ll snap at Martin Gray (Michael E. Knight) as he panics and pushes for the codicil’s destruction.

As for Ava, she’ll get a stern warning from Jax. He’ll insist he doesn’t want Nina hurt and will hope he’s been understood. Of course, Ava’s not going to care about Jax and his not-so-menacing threat. She’ll do what she wants anyway, so be prepared for major drama!