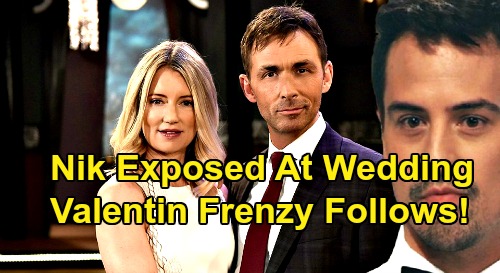 General Hospital (GH) spoilers tease that Nina Reeves (Cynthia Watros) will seek proof that’ll help her make a big decision – at least she hopes it’ll help! The truth is Nina just isn’t sure what she’s going to do when it comes to Valentin Cassadine (James Patrick Stuart). Part of Nina hates Valentin’s constant deception, but another part of her loves him and doesn’t want to blow up their family with Charlotte Cassadine (Scarlett Fernandez).

At GH, Nina will get the results of an important DNA test. General Hospital fans will recall how Liesl Obrecht (Kathleen Gati) came clean about Valentin’s involvement in the rigged ones. Sasha Gilmore (Sofia Mattsson) tried to take all the blame, but Nina always suspected her story was bogus. This had Valentin written all over it and was far too complex of a plot for Sasha to pull off singlehandedly.

Liesl’s claims backed up Nina’s hunch, but she also handed over a few strands of Madeline Reeves’ (Donna Mills) hair so Nina could run a test of her own. She assured Nina that the test would have the same result as Valentin’s test: mother and daughter. Nina will indeed run this test and get the proof she’s looking for. It’ll seal the deal in her mind that Valentin is a liar and perhaps always will be.

At GH, Nina will determine that she’s done with Valentin. Once she looks at these test results, Nina will feel like there’s no coming back from the depth of Valentin’s deception. She’ll think there’s just only so much you can take before you throw in the towel. However, some advice from her fake daughter will once again leave Nina on the fence.

Sasha will run into Nina and most likely get updates on Nina’s latest evidence. Nina may want to rub in the fact that she knows Sasha lied and then lied some more. Of course, Sasha will just be concerned about Nina and her future. She can tell that deep down, Nina is happy with Valentin despite his penchant for avoiding the truth. Sasha will encourage Nina to accept that maybe love is enough.

General Hospital spoilers say Sasha will remind Nina that Valentin’s actions weren’t mean-spirited. He truly wanted to give Nina her greatest desire and get their life together back on track. Sasha will hope that can still happen. She’ll push Nina to forgive and forget, so Nina will find herself back at square one in terms of her choice.

GH fans can expect things to come down to the wire as Nina and Valentin’s wedding ceremony approaches. She still won’t know if she’s going to say “I do” or break Valentin’s heart. Jasper “Jax” Jacks (Ingo Rademacher) won’t be rooting for their happily ever after, but he’ll think Nina’s too good for a revenge plot like this. He’ll be hoping Nina changes her mind about blowing things up publicly.

It turns out a different kind of blowup is brewing – one that seemingly involves Nikolas Cassadine’s (Marcus Coloma) exposure at the wedding! GH buzz shows us that Valentin will be in a frenzy once Nikolas is revealed. We’ll keep you posted as other GH news comes in. Stay tuned to the ABC soap and don’t forget to check CDL often for the latest General Hospital spoilers, updates and news.