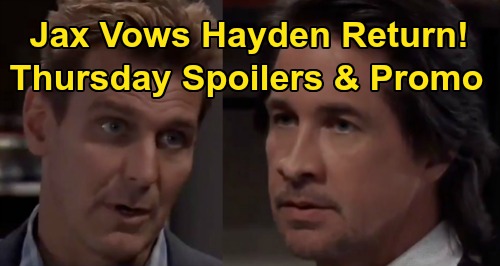 General Hospital (GH) spoilers for Thursday, January 9, tease that Hamilton Finn (Michael Easton) will demand some answers. He’ll seek out Jasper “Jax” Jacks (Ingo Rademacher) so they can have another conversation about Hayden Barnes (Rebecca Budig). Now that Nikolas Cassadine (Marcus Coloma) has gone public, Jax may rat him out for driving Hayden out of Port Charles.

Finn will give Jax an evil glare in Thursday’s GH episode. Jax will promise Finn that he’s going to do everything he can to bring Hayden home. However, Finn may wonder what he’s supposed to tell Violet Barnes (Jophielle Love) in the meantime. He’ll be livid over the horrible situation that’s been brought on this mother and daughter.

Over with Anna Devane (Finola Hughes), she’ll tell Peter August (Wes Ramsey) she has some questions. Anna may carefully broach the topic of Eurotech, the DVX front company that Peter was at. He was there at the same time as the gunman, but grilling Peter about this won’t be an easy task.

Anna won’t want to come across like she’s making leaps and accusations, but she’ll hope she can score the truth. Unfortunately, Peter just isn’t willing to be honest right now. He’s got too much at stake, so he’ll have to spin a story and try to shut down Anna’s suspicions.

Other General Hospital spoilers say Ava Jerome (Maura West) will have some wild updates for Julian Jerome (William deVry). She’ll visit Charlie’s Pub and bring Julian up to speed on her new hubby.

Ava will declare that she’s about to have the sweetest revenge. She’ll intend to take full advantage of her marriage to Nikolas, but Julian may worry she’s headed down a dangerous path.

At GH, Brad Cooper (Parry Shen) will be puzzled when Michael Corinthos (Chad Duell) appears with “Wiley Cooper-Jones” (Erik and Theo Olson). Michael will seem concerned, so Brad will ask if he’s OK.

Thursday’s preview video shows Michael admitting, “Not really.” Whether this involves Nelle Benson (Chloe Lanier) or something else, it’ll just be one more reason for Brad to freak out!

Next, Robert Scorpio (Tristan Rogers) will admit he’d like to hear Jason Morgan (Steve Burton) and Sam McCall’s (Kelly Monaco) proposal. They took a huge risk by showing up at the PCPD together, so Robert will know this must be important.

Sam and Jason will hope they can work out some sort of deal. They’ll want to go over the parole officer’s head and find a way to remain in each other’s lives.

It’s worth mentioning that General Hospital spoilers say Jason and Sam will start 2020 on a positive note. That hasn’t really happened yet – and we’re working with a small window here. It’ll only be the beginning of 2020 for so long! With that in mind, perhaps Robert will be open to “JaSam’s” pitch.

Across town, Sonny Corinthos (Maurice Benard) will defend his interest in Gladys Corbin’s (Bonnie Burroughs) research. She handed over an article on magnetic waves that could help Mike Corbin (Max Gail), but Carly Corinthos (Laura Wright) will fear this is giving Sonny false hope.

Nevertheless, Sonny will once again find himself unable to let go of his dad. He’ll tell Carly that this study could be the first step toward a cure, but Carly just won’t know if she buys that. Even so, this may be something Sonny has to do.

He mentioned that the study was in New York, and we know Sonny has a road trip coming up next week. It sounds like Sonny and Mike will be hitting the road soon enough!