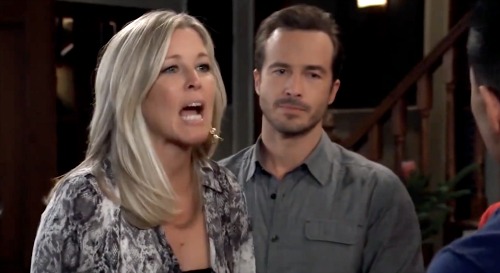 General Hospital (GH) spoilers tease that fans are still buzzing about the big reveal we’d all been waiting on. Brad Cooper (Parry Shen) kept Michael Corinthos’ (Chad Duell) son from him from well over a year, so we were all eager to watch Michael unleash his wrath.

After Lucas Jones (Ryan Carnes) remembered Brad’s confession, drama erupted in the Corinthos home and left many viewers baffled by one particular writing choice. Since this story’s really all about Michael and the child he was robbed of, why was Carly Corinthos (Laura Wright) made the focus instead of “Wiley Cooper-Jones’” father?

General Hospital fans know Carly loves to rant – and she absolutely should be ranting right now. Brad deserves to face some of Grandma Carly’s fury, but it was mostly like everyone else was standing around serving no real purpose. Michael should’ve been the one to take the reins and force Brad to walk him through the story of what happened that night, not Carly.

It was disappointing, especially since GH’s recent promo video included a special “and Chad Duell” credit. Duell had a brief moment to show off Michael’s fierce side, but it was barely much of a reaction at all. Michael was left glaring at Brad for the most part while Carly went on and on about Nelle Benson Archer (Chloe Lanier).

Of course, Michael will get some other scenes to highlight his anger along the way, but there’s no going back to those initial first moments. This was the true big reveal. The episode we’ll all remember – and what we’ll remember is Carly hogging the limelight when it should’ve been Michael instead.

On Twitter, many GH viewers have been voicing their outrage. “Michael needs an opportunity to have the stage. Not tomorrow or later. Now,” one fan insisted. Another fan said, “Is this Carly’s baby?! Why is SHE the center of this reveal?! Way to blow it, #GH.” “Ummmm, it’s not that Carly shouldn’t have a POV in this story,” one more fan explained. “It’s that hers should be about 7th in line, not written as number one.”

Others brought Carly’s history into it and argued she was the last person who should be ripping into Brad. “Carly, you really REALLY really want to watch yourself here,” one fan tweeted. “You kept Michael from AJ, tried to keep Nik from Spencer and let me not mention Ava and Avery.” “#gh wants us to forget about Carly being the queen of keeping sons away from their fathers,” another fan said.

Carly’s instinct to defend Michael is natural, but it’s a shame she had to swipe Michael’s big moment. General Hospital spoilers, updates and news say both Michael and Carly will unload more rage in the coming episodes, so let’s hope Michael still gets his chance to shine.

What did you think of Carly running the show? Should Michael have been the one to really take center stage? CDL will have lots of exciting news and updates as this storyline develops, so stick with us for some great General Hospital spoilers.