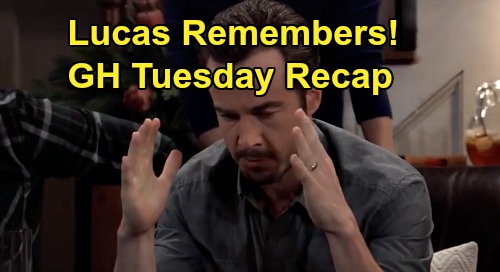 General Hospital (GH) spoilers recap for Tuesday, February 18. reveal that Jordan Ashford (Briana Nicole Henry) got a visit from TJ Ashford (Tajh Bellow) at her office. She gave him the engagement ring for Molly Lansing-Davis (Haley Pullos), which she had sized and ready for TJ’s big proposal.

Afterwards, Jordan got called to another overdose on the pier. When Jordan arrived at the crime scene, she was shocked to find out the victim was a man named Mark Simon – clearly it was someone she knew. She uncovered his face and was horrified to recognize him.

Meanwhile, at Kelly’s, Curtis Ashford (Donnell Turner) approached Marcus Taggert (Real Andrews), saying that they needed to get to know each other better. Curtis revealed that he knew that he and Jordan lied to him, and Taggert revealed that he knew about Curtis’ past cocaine problem. Taggert didn’t give up any info to Curtis, but he soon got a call from Jordan to come to pier 55.

Once there, Taggert learned that the DOA was Mark Simon. Jordan said that she had called Mark about Bob Massicotte’s (Randy J. Goodwin) death and that’s why he was in town.

They deduced that this was all because of the Cyrus Renault (Jeff Kober) bust. Jordan wondered how their identities got exposed since they were deep undercover, and she worried that the two of them would be next. Curtis then arrived on the scene and spied Jordan and Taggert hugging.

Meanwhile, at Sonny Corinthos’ (Maurice Benard) office, he and Jason Morgan (Steve Burton) talked about their next move. Jason said that he got confirmation that Cyrus brought in a shipment and that they can get to it.

Sonny deduced that if Cyrus “lost” the shipment, others would retaliate. Jason armed himself and left, promising to let Sonny know when “it” was done.

Next, at the Metro Court, Nelle Benson Archer (Chloe Lanier) secured her travel plans via phone – two first-class tickets to Buenos Aires. She turned around and saw Sam McCall (Kelly Monaco) standing there, but Sam didn’t hear the whole exchange.

After some bickering, Nelle overheard an employee on the phone with Carly Corinthos (Laura Wright) talking about the going-away party for Brad Cooper (Parry Shen) and Lucas Jones (Ryan Carnes).

Finn took off, and Anna and Peter sat down to talk. Peter quickly realized that the problems Finn and Anna were having was over him.

Anna deflected, and asked Peter if he made the Attorney General aware of Robert Scorpio’s (Tristan Rogers) deal with Sam and Jason. He admitted it, and Anna thanked him for his honesty.

Anna then asked if he had anything to do with the attack on Franco Baldwin (Roger Howarth) and Andre Maddox (Anthony Washington), but he denied it, saying he wouldn’t jeopardize the life he has now.

At another table, Sam talked with Molly, who was talking a mile a minute about a friend’s wedding and how the friend has turned into bridezilla. TJ then arrived and Sam took off.

TJ suggested that they go to a nice restaurant for dinner, but Molly started complaining about her friend’s wedding again and kind of dissing weddings in the process. TJ looked a bit deflated.

Next, Harrison Chase (Josh Swickard) arrived home to find Willow Tait (Katelyn MacMullen) with Brad. Turns out, Willow was babysitting Wiley Cooper-Jones (Theo and Erik Olson), since he had a cold.

Brad took off, and Willow told Chase about becoming Wiley’s designated guardian. Willow wondered if he thought she made the right decision, and Chase said that what mattered was what was best for Wiley.

Finn then knocked at the door, and he came in and promptly disclosed that he and Violet Barnes (Jophielle Love) moved out of Anna’s place. He and Chase talked privately, and Finn let his brother know that he doesn’t believe that Peter is reformed, and that he worried about Violet’s safety. Chase agreed that Violet’s safety is paramount.

Over at the Corinthos house, Michael Corinthos (Chad Duell) talked with Sasha Gilmore (Sofia Mattsson), relaying that losing Wiley was going to be tough. Julian Jerome (William deVry) showed up, and Bobbie Jones (Jacklyn Zeman) and Carly were present as well.

Brad and Lucas then showed up, and everyone talked about their move and how much everyone would miss each other.

Suddenly, Carly got a call saying that Nelle’s on the property, and she went to the door where Nelle’s stood with a security guard. Carly and Nelle argued, and Nelle yelled out for Brad, who rushed to the door.

Brad finagled a moment alone with Nelle, who wondered where Wiley was. Brad said that he was with Willow, and Nelle took off.

Brad returned to the group in the living room, and Lucas started having a flashback to his conversation with Brad in the car in the moments leading up to the crash.

Brad wondered what was going on, and Lucas tried to shake it off. Sam then arrived, and the group talked a bit more, while Lucas had another flashback of Brad leading up to his confession.

Julian asked if Lucas was ok, and he said that he thought he was remembering something from the night of the crash. Nelle peered in the window from the patio, watching the scene unfold, as Lucas tried to remember what came next.

Suddenly, Lucas flashed back to Brad saying, “Wiley isn’t the child we adopted. He’s Michael and Nelle’s son!’ Lucas then called out to Michael.

That was a great episode of General Hospital, and there’s bound to be more in store! Be sure to watch the ABC soap and don’t forget to check back with CDL often for the latest General Hospital spoilers, recaps, and news.