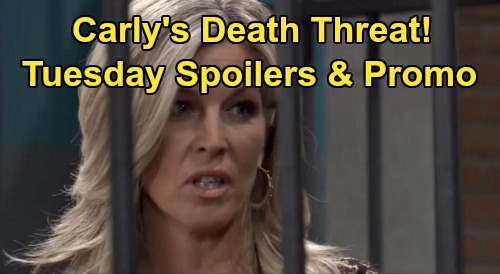 General Hospital (GH) spoilers for Tuesday, February 25, tease that Ned Quartermaine (Wally Kurth) will lay down the law. He’ll be sick of all Brook Lynn Quartermaine’s (Amanda Setton) drama, so he’ll insist her free ride stops right now. Brook Lynn is an adult who should be capable of handling her own problems. Ned will make that clear to his daughter, but Brook Lynn won’t look too happy about it.

Over with Dustin Phillips (Mark Lawson), he’ll bump into Olivia Quartermaine (Lisa LoCicero) and face an awkward chat. Dustin will be looking for someone else, but Olivia will contend that he’ll have to deal with her instead.

It’s hard for Olivia to watch Lulu Spencer (Emme Rylan) move on with somebody besides Dante Falconeri (Dominic Zamprogna). As a result, she’ll make the process hard on Dustin, too!

Meanwhile, Josslyn Jacks (Eden McCoy) will get some tough love from Trina Robinson (Sydney Mikayla). Trina always tells it like it is – and that’s exactly what she’ll do on Tuesday. General Hospital spoilers say Trina will realize Josslyn is going overboard on this whole journal thing. She’ll think it’s time to deliver a warning and hopefully steer Joss in the right direction.

Trina will insist that if Josslyn isn’t careful, she’s going to spend more time writing about her life than actually living it. Cameron Webber (William Lipton) will be on hand for this conversation, so he may jump in and defend Joss a bit. That journal has really helped her cope with Oscar Nero Quartermaine’s (Garren Stitt) death, so Cam will know it’s a tricky subject.

Of course, another tricky subject is ahead thanks to Trina’s scheme. She intends to stir up jealousy for Josslyn by lying about her “date” with Cameron. GH fans can expect Trina to put her plan in motion within the next episode or two, so stay tuned.

Other General Hospital spoilers say Julian Jerome (William deVry) will face backlash. Sam McCall (Kelly Monaco) will rip into Julian, so she may get upset about the help he’s offering Brad Cooper (Parry Shen). She doesn’t know Julian’s trying to save his own skin – and Julian will hope to keep it that way. He may come up with some excuses that seem reasonable to Sam as they talk to Alexis Davis (Nancy Lee Grahn).

Sam will eventually admit she agrees with Julian, which will catch Alexis off guard. That’s not something Sam does very often! Nevertheless, Sam will back Julian up in Tuesday’s episode. Perhaps Alexis will offer some legal advice as Julian secretly works to help himself.

Next, Jason Morgan (Steve Burton) will have more guidance for Michael Corinthos (Chad Duell). It looks like Michael will have plans on how to handle Nelle Benson Archer (Chloe Lanier), but what if they go wrong? Jason will think Michael needs to prepare for that possibility and devise an alternate strategy. There are other ways Nelle can be dealt with – deadly ones if need be.

Carly Corinthos (Laura Wright) will definitely convey that message once she visits Nelle in lockup. General Hospital spoilers, updates and news say Carly will be her usual belligerent self. She’ll warn that Nelle had better think twice about trying to beat the charges. Carly will insist that if Nelle’s plot works, her first steps in the sunshine could be her last.

General Hospital spoilers say Carly will also want to get a few things straight about Wiley Corinthos (Erik and Theo Olson). She’ll argue that Nelle is NEVER going to see Wiley again. If the legal system doesn’t make certain of it, then Carly will make certain of it herself. At least that’s the plan! You can bet Nelle won’t go down without a fight, so we’ll see how this battle turns out.

Some fantastic scenes are coming up, so GH fans will want to tune in. As other updates and news emerge, be sure to stop by CDL for more General Hospital spoilers.