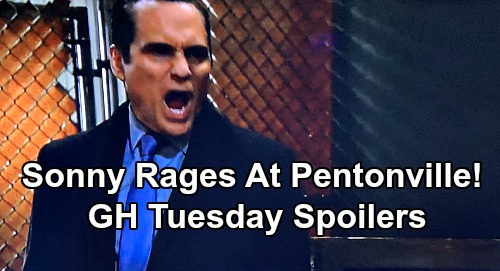 However, Michael thinks it’s best to keep his enemies close – and now Nelle has no intention of budging. On Tuesday, Nelle will declare that she’s not going anywhere. She’ll be set on sticking around, driving the Quartermaines up the wall and scoring a hefty payday as a result.

General Hospital spoilers say Michael will eventually put Nelle out in the boathouse, so that news will serve as a bit of a setback. Nevertheless, Nelle won’t let it deter her goals. She’ll keep at it while the Quartermaine clan deals with all the drama.

Over with Hamilton Finn (Michael Easton), he’ll catch up with Sam McCall (Kelly Monaco). GH spoilers say Sam will view Finn as a possible ally against Peter August (Wes Ramsey). She’ll think Finn might be able to spill something, but Finn will suggest Anna Devane’s (Finola Hughes) pretty careful not to share too much with him.

Of course, that’s not entirely true since Anna and Finn have discussed Peter’s connection to the gunman. They were at Eurotech, a DVX front company, at the same time – which is obviously a red flag.

Finn will hold off on betraying Anna, but that’s coming later this week. He’ll indeed make himself Sam and Jason Morgan’s (Steve Burton) ally, so that could spell trouble for Finn and Anna’s relationship.

Other General Hospital spoilers say Anna will face some unsettling moments. Tuesday’s GH preview video shows Peter telling Anna that no one’s going to save her in a context where he is threatening her life!

They’re sitting on a staircase – and Peter’s demeanor is pretty disturbing. Since this looks like Anna’s fantasy, we can’t rule out Peter hurling Anna down those stairs and trying to kill her. Anna’s mind could go to an awfully dark place!

Next, Carly Corinthos (Laura Wright) will have a heated argument with Jasper “Jax” Jacks (Ingo Rademacher). She’ll shout that she refuses to be separated from her daughter indefinitely.

Thanks to all the dangerous mob drama, Jax may want Josslyn Jacks (Eden McCoy) to make the move to Australia. He may contend that they have no choice if they want to keep Joss safe.

Carly won’t go for Jax’s idea, so that’ll bring plenty of conflict for these parents. As for Sonny Corinthos (Maurice Benard), his fury will explode. General Hospital’s preview video shows Sonny yelling, “That’s a problem for me!” The problem is likely that Sonny’s family is now at risk – and he just won’t stand for that.

Perhaps Sonny will be snarling at a middleman for Cyrus Renault (Jeff Kober), GH’s newest baddie. It turns out Cyrus is a Pentonville inmate and will sit down for a meeting with Sonny himself later in the week!

We’ll give you updates as other news comes in. Stay tuned to the ABC soap and don’t forget to check CDL often for the latest General Hospital spoilers, updates and news.