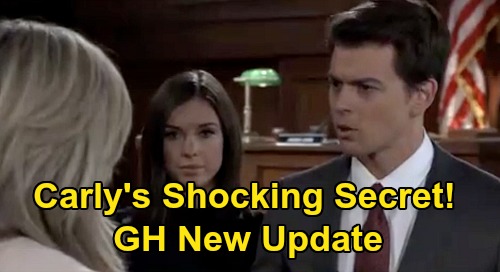 Sonny will do something that leaves Jordan worried about secret spillage, so she’ll corner him and warn him about serious this situation is. Jordan will make it crystal clear that Sonny needs to stay out of Mac’s investigation.

Sonny may assure Jordan that he’s not going to cause problems, but what would really help is if he could just take Cyrus out!

Unfortunately, the timing isn’t quite right for that yet. While Sonny and Jason Morgan (Steve Burton) wait for the ideal deadly moment, Cyrus will be free to roam around and push more buttons.

Ava Jerome (Maura West) will bump into Cyrus and have a lovely conversation – that is until Cyrus drops his name and suggests it’s a pleasure to meet her.

Cyrus’ flirty behavior will suddenly become creepy and disgusting to Ava, who’s in the loop on who Cyrus is and the threat he poses. While Ava’s guard goes up, Nelle Benson (Chloe Lanier) will gush over her wedding before her husband joins her in court.

Julian Jerome (William deVry) should drag himself in fuming over this marriage blackmail, but he’ll have to do whatever his new wife wants.

Michael Corinthos (Chad Duell) and Willow Corinthos (Katelyn MacMullen) will be taken aback by Nelle’s countermove, but there’s nothing they can do about it.

Once there’s a recess, Michael will grow curious about Carly Corinthos (Laura Wright). He’ll realize Carly doesn’t seem all that shocked by Nelle’s strategy, so Carly will confess that she was warned about Nelle’s bombshell.

Who filled Carly in? Ava seems like the only person who might’ve known about the new Mrs. Jerome. She’s trying to make an effort with Sonny and Carly lately, so Ava may have called Carly with Nelle and Julian’s marriage news.

Other General Hospital spoilers say Molly Lansing-Davis (Haley Pullos) will have a reason to celebrate. TJ will be excited about moving forward with this domestic partnership. The future is bright as far as TJ’s concerned, but it’s Molly’s past that’ll leave her uneasy.

Although Molly will try to be happy about this new chapter with TJ, her mind will drift back to that secret one-night stand with Brando Corbin (Johnny Wactor). In the week ahead, GH fans can expect someone to be rattled over a surprise pregnancy – and we’d bet big money Molly’s that person.

Meanwhile, Sam McCall (Kelly Monaco) will try to provide a distraction for Alexis Davis (Nancy Lee Grahn). General Hospital spoilers say Sam will have a good workout in mind. Sadly, that won’t keep Alexis from dwelling over the loss of her career. Alexis was disbarred, so she’ll be having an identity crisis on Monday.

Alexis won’t know who she is if she’s not a lawyer, but Sam will think her mom’s more than a degree and legal skills. Life has a lot to offer, so Sam will give Alexis a pep talk and advise her to find a new passion. That task will seem daunting right now, so Alexis may just have to wallow in misery a bit longer.