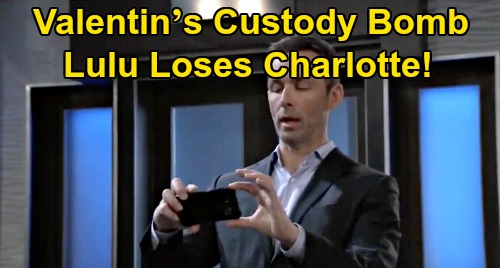 General Hospital (GH) spoilers reveal that Lulu Spencer (Emme Rylan) may have made a huge mistake by letting Brook Lynn Quartermaine (Amanda Setton) get under her skin. GH fans know there’s been a lot of talk about Michael Corinthos (Chad Duell) and Nelle Benson Archer’s (Chloe Lanier) custody battle lately. However, it seems GH may shift gears for a bit and focus on a war over a different kid.

Valentin Cassadine (James Patrick Stuart) gleefully whipped out his phone when he realized a major catfight was going down in the Metro Court. Lulu and Brook Lynn had the brawl of the century – and Valentin was all too eager to film the whole ugly thing!

Although Lulu warned Valentin to delete that video, he ultimately suggested that it was too late. Has Valentin already posted the video online somewhere?

Regardless, Valentin wouldn’t have filmed it if he didn’t intend to use it to his advantage. This brutal showdown certainly isn’t going to make Lulu look like a great mother. At best, Lulu seemed like an out-of-control teenager with anger management issues. This isn’t someone who was setting a good example for her daughter.

General Hospital fans know Charlotte Cassadine (Scarlett Fernandez) got into some trouble at school last year. Charlotte became a bully and caused other issues due to her behavior. Valentin now has video evidence of her terrible role model.

Of course, no one’s saying that Valentin is a standup guy. He tried to murder Ava Jerome (Maura West) not too long ago, so he’s not Father of the Year material either.

The difference is there’s not a video of Valentin’s horror show. That footage could do serious damage, especially if Valentin has a skilled lawyer spinning it. This may be something Valentin uses to his advantage in a revisited bid for full custody.

Valentin has a powerful hold on his daughter, so he might be able to convince Charlotte this is for the best. Charlotte always trusts her papa!

General Hospital spoilers say Valentin will continue his efforts to rebuild his life. He may have lost his Cassadine status and the fortune that goes with it, but he’s not giving up. Valentin is already well on his way to taking over ELQ. Now Valentin could be well on his way to scoring full custody, too.

Will that video do serious damage? Will Valentin use it to keep Charlotte away from Lulu? As other GH news comes in, don’t miss our GH updates. When a battle’s brewing, we all want to stay informed! CDL’s the place to be for exciting General Hospital spoilers, updates and news.