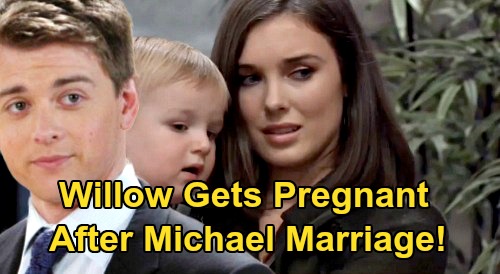 General Hospital (GH) spoilers tease that Michael Corinthos (Chad Duell) may run out of options. GH keeps bringing up the idea of Michael marrying Willow Tait (Katelyn MacMullen) like it’s Michael’s best shot at protecting his son. In the end, it may be the only way to keep Wiley Quartermaine-Corinthos (Erik and Theo Olson) away from Nelle Benson Archer (Chloe Lanier).

This would be a marriage of convenience – at least at first. Michael loves Sasha Gilmore (Sofia Mattsson) and Willow loves Harrison Chase (Josh Swickard). However, this is the prime setup for real sparks to fly between Michael and Willow. General Hospital has created a nice bond between them already, so they have a solid foundation to build on.

Plus, Wiley is what matters most to Michael and Willow. They’ve already connected over the kid and will undoubtedly continue to do so. Michael should be touched that Willow would go this far to protect Wiley, even knowing he’s not her flesh and blood.

That brings us to the next phase of the story. Could Wiley soon have a little brother or sister on the way? Willow and Michael may hope they can eventually dissolve this marriage and be with the people they really want. That plan may not pan out if they wind up letting this spark become a burning flame.

It seems likely Michael and Willow will land in bed together, which always brings the possibility of a soapy surprise pregnancy. Willow was devastated over the loss of her biological child. She’s always going to love Wiley, but there’s a hole in her heart now. Michael also missed out on so many firsts with Wiley, who was kept away from him for well over a year.

A Michael and Willow baby would give both of them a chance to raise a child from the start. Naturally, it would also solidify that bond we mentioned and complete their happy family with Wiley. It could close the door on Willow and Michael’s romances with Chase and Sasha – for a while anyway.

General Hospital fans will recall that pregnancy scare Willow had. Once Willow realized she wasn’t expecting after all, it brought both relief and disappointment. There’s part of Willow that would like finding out she had a bun in the oven – once the panic died down of course!

There’s always been a ton of baby talk surrounding Willow, so giving her a baby bombshell would be in line with what GH has done so far. Will Michael and Willow’s inevitable marriage lead to a family addition? Is a pregnancy in the works for Willow? We’ll give you updates if any potential baby news comes in.