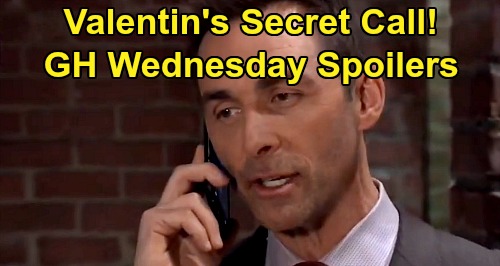 General Hospital (GH) spoilers update for Wednesday, April 1, tease that Nina Reeves (Cynthia Watros) will be in panic mode. At Kelly’s, Nina will spot Jasper “Jax” Jacks (Ingo Rademacher) in some sort of crisis and cry out in fear. Nina will assume Jax is injured or facing a medical issue, but she may have the wrong idea.

It seems like it’ll be business as usual for the rest of the restaurant. Nobody else around Jax will seem concerned, so Nina may simply walk in at the wrong moment. She could easily see Jax bent down looking for something and assume he’s collapsed.

Whatever the case, Jax will be well enough for a business discussion on Wednesday. General Hospital spoilers say Nina’s decision-making skills will be questioned.

Nelle Benson Archer (Chloe Lanier) is part of the staff at Crimson again, so that’ll certainly be one of the choices Jax doesn’t like. It’s all part of a sneaky plan, but Jax may worry that Nina’s getting in over her head.

On a happier note, Nina will catch up with Charlotte Cassadine (Scarlett Fernandez) on Wednesday. Charlotte adores Nina, so she should enjoy an opportunity to have some girl talk.

At GH, Mike Corbin (Max Gail) will remain in bad shape. General Hospital spoilers say Mike will refuse to listen to his doctors’ orders or anyone else’s advice for that matter. Sonny Corinthos (Maurice Benard) will struggle as Mike blasts him.

Mike will want Sonny to go away, which is the last thing Sonny wants to do right now. Sonny will feel like his father needs his support, but he won’t know how to give it when Mike’s so combative. All Sonny can do is get choked up and watch Mike’s inevitable march toward death.

Sonny will lean on Carly Corinthos (Laura Wright) soon, but she’ll be busy with Brando Corbin (Johnny Wactor) in the meantime. Carly will ask Brando about the other shoe and when it’s going to drop.

She might warn about old secrets coming back to haunt Brando if he lets them. Brando may not offer many details about his past, but he’ll be kind to Carly and let her see some depth to his character.

While Carly and Brando connect, Julian Jerome (William deVry) will continue his fierce outburst. He just confronted Neil Byrne (Joe Flanigan) at GH, but it looks like Neil will claim he never hooked up with Alexis Davis (Nancy Lee Grahn). Julian will rant about having proof, so he may call on Britt Westbourne (Kelly Thiebaud) to spill what she saw again.

Over with Trina Robinson (Sydney Mikayla), she’ll be appalled by the allegations against Marcus Taggert (Real Andrews). Once Portia Robinson (Brook Kerr) offers updates on Taggert’s crimes, Trina will refuse to believe her.

Naturally, Trina’s outburst could add to Jordan’s guilt. She’s covering up her own involvement in this mess and letting her team take the fall. Jordan’s to blame for Trina’s pain, but it’s a sacrifice she must make for TJ Ashford’s (Tajh Bellow) sake.

Meanwhile, Lulu Spencer (Emme Rylan) will rant about Brook Lynn Quartemaine (Amanda Setton) going after her boyfriend. That’s indeed what Brook Lynn suggested on Tuesday, but it turns out she was just stirring the pot. What Brook Lynn really means is that she needs Dustin Phillips’ (Mark Lawson) help with something.

On Wednesday, Brook Lynn might want to pick Dustin’s brain about some new song lyrics or a tune she’s been working on. Dustin appreciates Brook Lynn’s talent, so she knows she can trust his opinion. Whatever the case, General Hospital spoilers say any peace Brook Lynn and Lulu make will be short-lived.

Finally, Valentin Cassadine (James Patrick Stuart) will be pleased over acquiring Brook Lynn’s ELQ shares. Valentin will talk to someone about the news over the phone, so that’ll probably be Martin Gray (Michael E. Knight).

General Hospital spoilers say Valentin will feel like he’s in the homestretch. He’ll be well on his way to scoring the shares he needs for a full-blown takeover.

It sounds like some fantastic scenes are in store. GH viewers will want to stay tuned for even more hot drama. As always, CDL will have great General Hospital spoilers, news and updates to read up on.