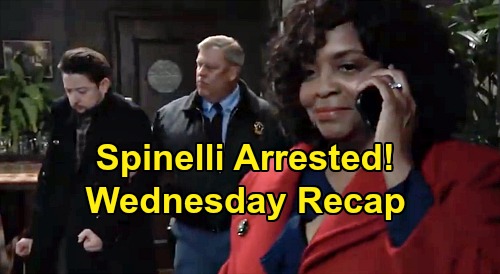 Carly then when on about how awful Nelle was, with Nina not being able to get a word in edgewise. Finally, Nina broke in and told Carly that she was planning on “befriending” Nelle and then testifying against her at the custody hearing.

Carly was relieved, and she wanted to help Nina with her plan, but Nina refused, saying it was too risky. Carly balked but ultimately understood.

Meanwhile, at GH, Monica Quartermaine (Leslie Charleson) formally welcomed Portia Robinson (Brooke Kerr) on staff. Portia then got a call saying that Trina Robinson (Sydney Mikayla) had cut school and she rushed off.

Monica and a nurse whisked Wiley away for an echocardiogram, then later Monica returned to say that the hole in Wiley’s heart hadn’t corrected itself and that he needs surgery. Monica noted that Nelle would have to sign off on the surgery, which upset Michael.

Later, Nelle rushed in, asking Michael what he did to Wiley. Michael explained about the surgery, but Nelle disagreed, and she refused to sign the consent forms.

At Kelly’s, Sam McCall (Kelly Monaco) and her parole officer Delores Maloney (Andi Chapman) met, and Delores was pleased that Sam was keeping her distance from Jason Morgan (Steve Burton). Delores got a call and stepped outside, where Damian Spinelli (Bradford Anderson) clumsily lurked and followed her.

Molly Lansing-Davis (Haley Pullos) joined Sam in Kelly’s and lamented that she hadn’t heard from TJ Ashford (Tajh Bellow) for days. Sam shared that Jordan Ashford (Briana Nicole Henry) had tracked the coordinates of TJ’s phone but didn’t find him.

Sam looked to see where the phone was now, and they realized that it was at Jordan’s apartment complex. Molly took off to go to Jordan’s.

At some bar, Spinelli saw Delores cozying up to a man, who turned out to be a city councilman for the city of Port Charles. Spinelli called Sam, who was still at Kelly’s, and told her about his find.

Sam and Spinelli noted that both Delores and the councilman were married to other people. Sam warned Spinelli to be careful, and Spinelli continued to awkwardly surveil them.

Later, Delores called Sam from the bar to say she found something very disappointing, and that “your friend is in a very compromising position.” An officer had Spinelli in handcuffs as Delores looked on.

At Ava Jerome’s (Maura West) gallery, Trina showed up and told Ava that she was ready to get back to work. Ava gently pointed out that she had just lost her father, but Trina insisted on working.

They were chatting about Franco Baldwin’s (Roger Howarth) art career when Portia entered and blasted Trina for cutting school. Ava tried to intervene, but Portia shut her down, and Ava left them to talk.

As Ava listened in, Portia and Trina had a good talk. Trina opened up about her grief over missing her dad, but she said that her mom wouldn’t understand. Portia realized that Trina thought that because she had divorced Marcus Taggert (Real Andrews), she didn’t love him, Portia explained that she still loved Taggert, and mother and daughter bonded in their grief.

Over at Jordan’s apartment, she lamented about setting Cyrus Renault (Jeff Kober) free, while Sonny Corinthos (Maurice Benard) argued that if Cyrus was free, then he could retaliate. Jordan refused to look the other way, but Curtis Ashford (Donnell Turner) said that keeping Cyrus in jail signs TJ’s death warrant.Jordan lamented that if she confessed to framing Cyrus, then she’d go to jail. Curtis said that wasn’t going to happen.

Sonny and Jason looked at each other knowingly, then Jason explained that Jordan could exonerate Cyrus without taking the fall – she just needed to lie and say that she just discovered that the other three members of her task force framed Cyrus. Jordan balked, saying that she wouldn’t do that to her team members’ memories. But after Jordan gave it some thought, she realized it was the only way.

Jordan made a call and set the whole thing in motion, and Sonny and Jason left, saying they’d be in touch. Right outside the door, Jason asked Sonny if he thought Jordan would see this through.

Sonny replied, “It’s the only way she’ll see her son, which is good news, because that way our friend is on the outside where we can get to him.” Jason and Sonny walked off, and Molly walked up to Jordan’s door, looking after them.

There’s definitely a lot going on right now on General Hospital, so stay tuned! Keep on watching the ABC soap and remember that CDL is your trusted source for all of your GH news and spoilers. We’ll keep you in the loop about what’s happening on GH and all the soaps!