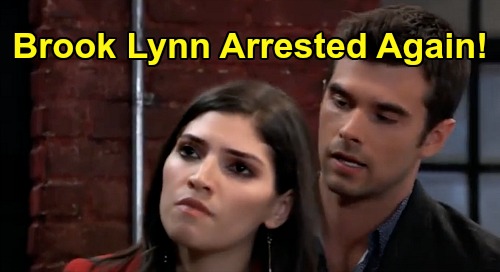 General Hospital (GH) spoilers recap for Wednesday, May 6, reveal that Anna Devane (Finola Hughes) arrived at GH to see Hamilton Finn (Michael Easton, but soon got a call from Felicia Scorpio (Kristina Wagner) who was at The Floating Rib with Mac Scorpio (John J. York) and Robert Scorpio (Tristan Rogers). Felicia was worried about Robert, who was distraught about Holly Sutton’s (Emma Samms) death. Anna left to join them,

Once at The Floating Rib, Anna found Mac and Robert commiserating about losing Holly. Robert was pretty drunk, and he took the opportunity to snarl at Peter August (Wes Ramsey) and Maxie Jones (Kirsten Storms) when they walked in. Anna rushed over to Maxie and Peter and they discussed Holly’s death. Peter asked who Holly was.

Maxie and Peter then approached Mac and Robert at their table, and Peter commented about the “late Holly Sutton.” A drunken Robert blasted Peter for his comment, saying that Holly had to die while a dirtbag like Peter got to live. Peter stepped away while Maxie chastised Robert.

Over by the restrooms, Peter texted someone, saying “Need answers. NOW.” Maxie soon joined Peter and apologized for what Robert said. Peter then went outside to the alley where some guy showed up.

Peter scruffed the guy up, saying that he only wanted Robert distracted and that he didn’t want Holly dead. The guy insisted that he had nothing to do with the “incident.”

Back inside the bar, Mac asked Maxie to overlook what Robert said earlier, and that it was just the beer talking. Meanwhile, Felicia told Anna that she read a classified report from the WSB, and that there was more to the story about Holly’s death.

Next, at the gym, Brook Lynn Quartermaine (Amanda Setton) encouraged Michael Corinthos (Chad Duell) to spar with her, so that he could vent ahead of tomorrow’s custody hearing.

As Michael punched away, Brook Lynn told him to pretend that she’s “that girlfriend stealing Chase” at the moment when Harrison Chase (Josh Swickard) and Sasha Gilmore (Sofia Mattsson) walked in.

Brook Lynn immediately jumped all over Sasha, saying that she was rotten to her core and one step above Nelle Benson Archer (Chloe Lanier). Brook Lynn proceeded to name call Sasha and Chase, then she slugged Sasha.

Later, just Chase and Brook Lynn remained at the gym, and Chase wrote Brook Lynn a citation for disturbing the peace. Brook Lynn tore it up, so Chase arrested her.

Carly was exasperated and feared that Nelle was winning Nina over. After some more back and forth about Nina and Nelle, Jax offered to talk with Nina about the custody hearing.

At Crimson, Nelle continued to ty to persuade Nina to testify on her behalf as a character witness at the custody hearing. Nina balked, saying that all she could really say was that Nelle had done a good job at Crimson for the past month. Nelle said that she overheard Nina defending her to Carly earlier, but Nina said that Nelle misunderstood what she heard.

Nina argued that the custody case had nothing to do with her at all, and Nelle proceeded to lay it on thick about how now she has a second chance to hold her baby in her arms and that she deserved a second chance.

Nelle was begging Nina to help her out when Jax entered and interrupted them. Nelle reluctantly left, and Jax learned that Nelle had asked Nina to testify for her in the custody matter.

Nina said that she had a lot to think about, and Jax realized that Nina hadn’t told Nelle no. Jax warned that if Nelle wins the custody suit, then Wiley Quartermaine Corinthos (Erik and Theo Olson) will pay the price. Downstairs at the Metro Court, Nelle called Martin Grey (Michael E. Knight) and said that she found her character witness.

Mike gestured for Sonny to come close and he said, “Yankees.” Sonny turned on the baseball game and watched it with Mike. Felix returned to check on Mike and noticed the nice father/son time going on.

Later, Carly arrived, and Sonny told her that his dad wasn’t ready to give up just yet, and that he’d try again tomorrow to discuss the DNR with Mike. Sonny and Carly left, with Mike watching the Yankees’ game.

Molly Lansing-Davis (Haley Pullos) and Alexis Davis (Nancy Lee Grahn) blasted Kristina for picking on Sam, and eventually Sam said that this whole discussion made her want a drink.

Sam immediately apologized to Alexis for that comment, and then Alexis was forced to tell Molly and Kristina that she drank recently. Sam said it was her fault, and Alexis argued that it was her own fault for taking the drink.

Neil Byrne’s (Joe Flanigan) name came up, and Alexis said that she didn’t know where she stood with him, then Diane Miller (Carolyn Hennesy) called with the bad news that Alexis had been disbarred.

There’s definitely a lot going on right now on General Hospital, so stay tuned! We’ll give you updates as more GH news comes in. Stick with the ABC soap and don’t forget to keep CDL bookmarked for the latest General Hospital recaps, news, and spoilers.