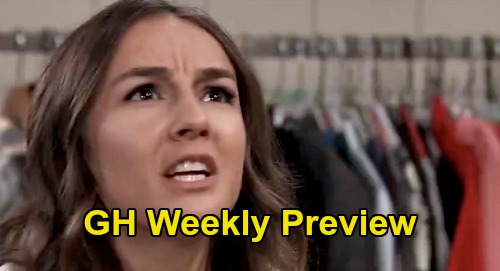 General Hospital (GH) spoilers tease that viewers are in for some bombshells, battles, and threats as we gear up for the week ahead. The new GH preview for the week of May 4th looks pretty intense, so let’s get right into it! First off, tension will quickly escalate between Ava Jerome (Maura West) and Nikolas Cassadine (Marcus Coloma) after Nikolas receives a letter from Spencer Cassadine (Nicolas Bechtel). The letter will say that Spencer will accept Nikolas in his life again, but on one condition…that Nikolas divorces Ava.

Of course, this is going to be a big problem for Nikolas, since divorcing Ava would mean that he’d forfeit the Cassadine fortune to her. That’s going to be unacceptable to Nikolas, and it looks like he and Ava will have quite the battle over it.

It will get so intense that Ava will haul off and slap Nikolas with all her might, telling him, “It’s your choice, your money or your son!” Nikolas is going to be in a real bind here.

Next, Kristina Corinthos-Davis (Lexi Ainsworth) will have some words for her big sister Sam McCall (Kelly Monaco). Sam has been moping around for a while now, ever since Jason Morgan (Steve Burton) declared that the two of them couldn’t see each other anymore.

Sam recently took out her frustrations on Brando Corbin (Johnny Wactor), who promptly called her out on having her own issues regarding Jason.

Well, now Kristina will give Sam another reality check. Kristina is shown in the GH preview promo acting exasperated with Sam and saying, “If there was never any drama, the two of you wouldn’t survive!”

Of course, there’s probably some truth to that statement, given that Jason and Sam enjoy living on the edge most of the time. Kristina might even wonder if Sam and Jason would make it if they were together living a relatively “normal” existence.

The new GH promo also addresses the situation surrounding Nelle Benson Archer (Chloe Lanier). It looks like Nelle might cause some more trouble around Charlie’s Pub, since Julian Jerome (William deVry) is shown in the promo glaring at Nelle and saying, “Nelle Benson is done here.”

GH viewers will remember that Nelle caused problems in the pub before when she mouthed off and caused Willow Tait (Katelyn MacMullen) to douse her with a drink.

We’ll see what Nelle’s up to this week, but it certainly looks like she’s going to cause some sort of scene in the pub. Perhaps Nelle will get into it again with Willow, or even with Michael Corinthos (Chad Duell). Whatever the case, it looks like Julian is going to want to make the pub a Nelle-free zone.

Of course, Cyrus and Sonny have brokered an agreement, but there’s danger on the horizon for Jason, as Cyrus has said that he wants to get rid of Sonny’s right-hand man.

Finally, the new GH promo shows a shocking scene unfolding at the gym. What leads up to this is a mystery, but it looks like Michael, Harrison Chase (Josh Swickard), Brook Lynn Quartermaine (Amanda Setton), and Sasha Gilmore (Sofia Mattsson) will all be in the ring together at the same time.

Brook Lynn will then totally slug Sasha with her boxing glove, and it looks like this will come out of nowhere, given Chase and Michael’s reactions.

Perhaps Brook Lynn will simply be peeved at Sasha for breaking Michael’s heart and she’ll seize the moment and get physical. Whatever the case, it’s going to be quite the scene, as Brook Lynn looks pretty angry and out of control!

Of course, Brook Lynn won’t know that Sasha and Chase lied about having an affair just to Michael would marry Willow and improve his chances of winning the custody case.

It looks like we’re in for an exciting week on the ABC soap, so stay tuned! Be sure to keep CDL at the ready for all the latest General Hospital spoilers, daily recaps, and news.

"It's your choice… your money or your son." #GH pic.twitter.com/hs9aFJWju6