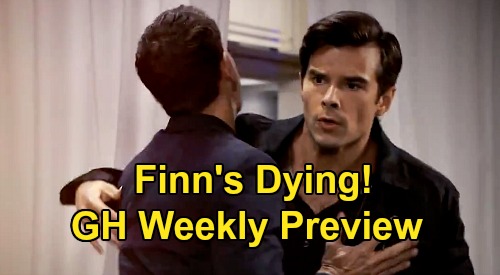 General Hospital (GH) spoilers tease that we’re in for a big week on the ABC soap. The new GH preview for the week of November 9 is out, and it’s a somber sequence of scenes for sure!

The action starts out with Portia Robinson (Brooke Kerr) at the hospital performing emergency CPR on Hamilton Finn (Michael Easton) as Peter August (Wes Ramsey) looks on and Harrison Chase (Josh Swickard) rushes into the room.

Things certainly aren’t looking good for Finn, who seems to be in a real fight for his life here. Chase is shown a bit later in the promo looking very upset about something, which doesn’t bode well for Finn and his prognosis.

Of course, if Finn does lose the battle and he dies, then Anna Devane (Finola Hughes) is going to be feeling very guilty about her role in the whole thing – and we should note that the promo doesn’t address what’s going on with Maxie Jones (Kirsten Storms) on The Haunted Star, so she could be hurt, too.

But Alex Devane Marick (Finola Hughes) is shown on the ground for a split second, indicating that she may lose her gun battle against Anna.

Sasha definitely doesn’t look good, as she seems to be inching closer and closer to an overdose, and Nina Reeves (Cynthia Watros) is shown looking somber about the whole situation.

Next, the new GH preview shows Franco Baldwin (Roger Howarth) finally confessing to Elizabeth Baldwin (Rebecca Herbst) that his brain tumor is back.

It was looking for a while that Franco was going to continue to keep the truth from his family, but someone seems to have convinced Franco to tell Elizabeth, which is a good move. “My brain tumor is back,” Franco tells a distraught-looking Elizabeth.

Curtis Ashford (Donnell Turner) and Jordan Ashford (Briana Nicole Henry) are also shown in a quick scene being surprised by someone and drawing their weapon.

This appears to be happening on the road, as Curtis and Jordan are in the Pacific Northwest. Could they be at that mysterious Wilson Avenue address looking for Cyrus Renault’s (Jeff Kober) weak link?

The promo then shows some quick flashes showing Sonny Corinthos (Maurice Benard), Dante Falconeri (Dominick Zamprogna), and Jason Morgan (Steve Burton), indicating that something big is going down and everyone is hearing the news.

Finally, the promo includes a key auditory moment at the end – we don’t see him, but we hear Valentin Cassadine’s (James Patrick Stuart) wailing, “For God’s Sake, Not Here!” What could this be about? Might Valentin be referring to the timing of some news being shared – perhaps Peter’s parentage? Or will Valentin be trying to stop a fight? GH viewers will have to tune in to see!

It seems that we’re in for an exciting week, so stay tuned to the ABC soap! We’ll be sure to give you updates as more exciting GH news comes in. And remember to keep CDL bookmarked for the latest General Hospital spoilers, updates, and news.

‘Til death do us part. #GH pic.twitter.com/yCklTh7LA9