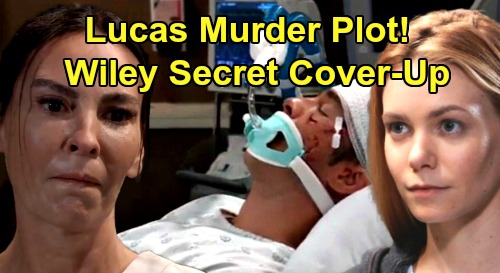 General Hospital (GH) spoilers tease that Lucas Jones (Ryan Carnes) could be in grave danger. The poor guy’s already in a coma, but things can almost always get worse on GH! Just before the crash, Brad Cooper (Parry Shen) blurted out that “Wiley Cooper-Jones” (Erik and Theo Olson) was actually Michael Corinthos (Chad Duell) and Nelle Benson’s (Chloe Lanier) son. When Lucas awakens, he could have quite a secret to share.

Of course, there’s a chance Lucas will have some memory loss due to his brain injury. That’d be a reasonable direction for General Hospital writers to take this story. However, a lot can happen between now and when Lucas wakes up. In fact, there could be a couple characters who never want Lucas to awaken at all!

For starters, Harmony Miller (Inga Cadranel) just got a job at Turning Woods, where Lucas has been admitted for his long-term recovery. The doctors can’t be certain if Lucas will come back to his family, but Julian Jerome (William deVry) and Brad Cooper (Parry Shen) are holding out hope. They’ve already been visiting Lucas and will continue to do so in the coming weeks.

Harmony keeps insisting that she’s turned over a new leaf, but there’s still something creepy about her. Even Willow Tait (Katelyn MacMullen) seems uncomfortable with Harmony’s attempts to reconnect.

Due to her involvement with Shiloh Archer (Coby Ryan McLaughlin) and the darkness she’s struggled to move past, Harmony’s still a wildcard.

If Harmony overhears what Lucas might remember, would she be willing to make sure he never awakens to blab? We have to remember that Harmony’s desperate not to let any more pain come to Willow.

Even though Harmony’s away from the cult lifestyle now, that’s still how she’s used to living – with loyalty to those closest to her and disregard for those outside the circle.

Harmony could easily decide on a murder plot to get rid of Lucas so Willow would never learn her son died. Willow has bonded with “Wiley” and would be devastated if she knew the truth.

There has to be a reason Harmony’s at Turning Woods, and it could involve doing away with Lucas. Then again, it might be a free Nelle Benson (Chloe Lanier) who tries to do the deed!

In that case, maybe Harmony would have a chance to prove she’s truly changed. If Nelle realizes her plans could be blown by Lucas, she wouldn’t have a problem with murdering him.

Nelle will take out anyone who gets in her way! She wants “Wiley” for herself and has no intention of sharing him with Michael. Nelle also doesn’t want to land back in Pentonville over the baby swap, so Lucas’ knowledge could lead to problems unless she finds a workaround.

This raises the possibility of Harmony thwarting Nelle’s deadly scheme. Although Harmony could easily be an option here, Nelle’s the biggest threat between the two of them. Between her track record and her crazy side, Nelle’s capable of anything.

Regardless, the fact that Lucas knows this bombshell could spell trouble – even while he’s comatose! General Hospital spoilers say Lucas will surely survive, but some great drama will still come out of all this.

We’ll give you updates as other GH news comes in. Stick with the ABC soap and don’t forget to check CDL often for the latest General Hospital spoilers, updates and news