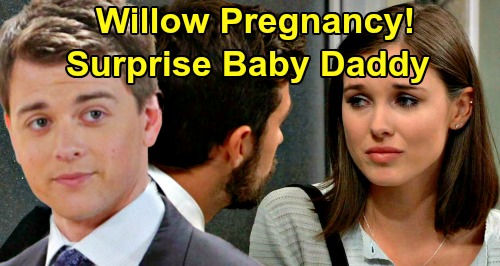 Willow has proven that when it comes to “Wiley,” she’s willing to step up and do whatever it takes for his safety. If Brad Cooper (Parry Shen) keeps letting Nelle run the show, Willow may even pursue her legal options and see if there’s a way to revoke the adoption.

Again, Willow’s all about protecting her son by any means necessary…except he’s not her son. Almost every single move Willow’s made since her debut has revolved around “Wiley.”

Willow has no idea that her own baby boy died the night he came home from the hospital. Can you imagine the pain Willow will face once she realizes “Wiley” was never hers at all? She’ll deal with the double blow of losing “Wiley” and the child she never got to know.

Naturally, Michael Corinthos (Chad Duell) cares about Willow and will allow her to remain in his son’s life. Even so, Willow’s going to struggle with the loss of her true biological child.

Willow will be a prime candidate for a surprise pregnancy down the road. It’d be Willow’s miracle baby to make up for losing Wiley.

Willow already had a pregnancy scare, but next time it might be the real deal and could even spark a paternity mystery depending on how this plays out. Willow and Harrison Chase (Josh Swickard) will likely face some problems after the truth about “Wiley” comes out.

Although Willow may maintain her relationship with Chase, she find it difficult to open up to him – not like she can with Michael.

Michael didn’t really lose Jonah Corinthos, but he went through all the stages of grief just like he did. He was also duped by Nelle and Brad right along with Willow.

They’re both victims of this twisted baby swap scheme, so they can connect over that. Plus, Willow will want to keep spending time with “Wiley” and may find herself growing distant from Chase.

Could Willow sleep with Michael under those circumstances – especially since they’ll both be in such an emotionally vulnerable place?

Their lives are about to be turned upside down by this massive secret, so they won’t exactly be in the right frame of mind to make positive choices. It’s easy to imagine Michael and Willow caving into a night of passion after a particularly tender conversation.

Willow could stand to make a few mistakes just for the sake of being soapy. Characters don’t need to be all good or all bad! Flaws and blunders are what keep the drama going, so it’d be interesting if Willow cheated with Michael and then found herself with a baby dilemma.

General Hospital might go for a “Who’s the daddy?” GH fans could be left guessing whether the father was Michael or Chase.

There’s no guarantee the show will take things in that direction, but it’s an intriguing possibility to explore. General Hospital spoilers say Willow will be an emotional wreck after this “Wiley” bomb drops, so she’ll be capable of anything!