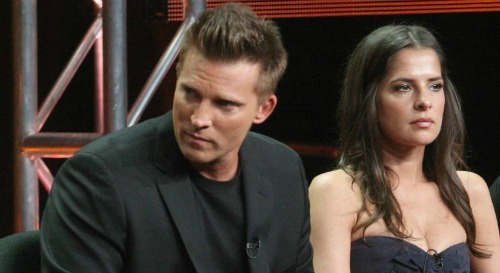 General Hospital (GH) spoilers reveal that fans are divided about Jason Morgan’s (Steve Burton) future with Sam McCall (Kelly Monaco). There are lots of “JaSam” supporters out there who are still rooting for them.

Despite Sam and Jason’s reunion, they haven’t had a period of true bliss since Burton returned to the role. “JaSam” lovers out there are definitely hoping their couple gets a chance at peace soon.

However, some fans out there have grown weary from the battle. It seems like there’s always some reason for GH to keep Jason and Sam apart or unhappy. Every time they get rid of one obstacle, another one lands in their path. Some viewers are sick of it and are ready for a change. Is it time for Jason to find a new woman?

People tend to talk a lot about Sam’s options if she ever splits from Jason. However, you don’t hear as much about Jason’s new lover candidates. Let’s fix that! We might as well mull over the possibilities for Jason.

It never hurts to consider what might happen down the road – or at least lay out some romantic contenders for Jason.

First, let’s consider a couple of options that just aren’t going to happen. Although there are still fans of the Jason and Elizabeth Baldwin (Rebecca Herbst) pairing, that ship seems to have sailed. General Hospital apparently has no interest in reuniting Liz and Jason, but that doesn’t mean Jason can’t find love with someone else.

There are also some viewers who have suggested Jason and Nelle Benson Archer (Chloe Lanier) as a possibility, which seems crazy on so many levels. That’s just never going to be a thing.

Nelle is a psychopath who pretended to sleep with Sonny Corinthos (Maurice Benard), got Carly Corinthos (Laura Wright) locked up in Ferncliff and tried to kill Michael Corinthos (Chad Duell).

Not to mention Nelle is now going after Michael’s godson (and secret bio kid), “Wiley Cooper-Jones” (Erik and Theo Olson)! Nelle has targeted nearly everyone Jason loves most. She happens to be decades younger than Jason as well, so it’s weird that this fan suggestion keeps floating around. What on earth would Jason see in Nelle?

Now let’s consider an unusual option that’s a bit more viable. Ava Jerome (Maura West) would actually be an interesting love interest for Jason. She helped Jason score his freedom from the Russian clinic, so a bond was established back then.

Jason cut off that bond after he found out about Ava’s role in Morgan Corinthos’ (Bryan Craig) death, but that’s not too big of a hurdle on a soap.

General Hospital did a fantasy episode at one point, which included a kiss between Jason and Ava. It led to some “Java” shippers and was perhaps a chemistry test – just in case GH ever decided to pursue that down the line. It’s at least an intriguing option to ponder!

There aren’t a ton of other age-appropriate love interests on canvas, but the show could always bring in a new woman for Jason. Do you think that’s something GH should consider or should they stick with “JaSam” and give them a fair shake?