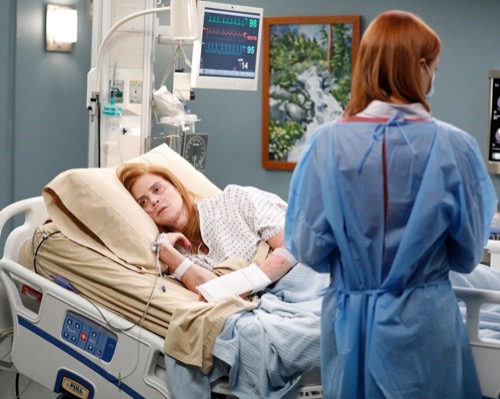 Elsewhere in the hospital, Jackson, Owen, and Jo work on a couple injured in a bear attack; and Levi is hurt when Nico doesn’t want him to meet his parents.”

The doctors treated a couple that was targeted by a bear. The bear spotted their camping site and it attacked for food. It mauled both the husband and wife. The wife’s arm was nearly clawed. Rachel was luckier than her husband Scott. Scott’s nose was in fact ripped off and so Jackson had to surgically recreate his face. The things with the bear had everyone spooked. Jo was taking it to heart because she questioned if Alex was like the bear. She wondered if Alex was going to suddenly turn on her and it didn’t help that he wasn’t in contact.

Alex was dealing with some issues with his family. He wasn’t in communication and it was scaring his wife. Jo talked to Linc about it. She thought Linc has his own bear with Amelia and it didn’t help that Amelia has done this before. Amelia once ghosted her husband because she didn’t want to talk about kids. Amelia had the excuse of a tumor back then and so there was nothing to explain her actions now. She should have gotten the DNA test. She should have put Linc out of misery because now it’s prolonging the sadness and fear.

Its why Jo referred to Amelia as Linc’s bear. She thinks Amelia’s situation is going to maul him and it didn’t help that ran into that couple again. Jo was treating Rachel. She was in the room when a guy walked in and suddenly Rachel was making out with him. Jo like everyone else had assumed Rachel was married to Scott and so where did this second guy come in? His name is Brian. Rachel was in love with him and she planned on leaving her husband for him. She was going to tell Scott on this camping trip.

Then the bear happened. Scott jumped in front of his wife and he saved her life. His actions were now making Rachel question her decision. She still loves Brian and she also loves her husband. Rachel doesn’t know how to tell him now. She needed time and so she convinced her doctors into helping her. They came up with an excuse for why Scott couldn’t see her. Jackson hadn’t understood why they did that at first and later Jo told him the truth. It turns out the whole hospital now knows the sordid tale.

They were all speculating on what this could mean. Jo again thought this bear situation was a great metaphor for relationships and so she talked to Owen. She posed a hypothetical to him during surgery. She asked him what would happen if he found out Amelia’s baby was his and he rejected the idea. Owen said it took him a long time to find what he has with Teddy. He wasn’t going to ruin that or put that at risk over anything and he reassured Jo that her husband wouldn’t do the same either.

Owen had no idea what was going on. Amelia was staying at home for the time being because she was so scared of what a DNA test might reveal and she was relying on Maggie. Maggie took time off of her new job so that she could be there for Amelia. Amelia was falling apart. She didn’t know what she wanted to do and she thought she could handle the stress on her own. She couldn’t. Maggie could see that she couldn’t and so Maggie was taking care of her at the house. They were hiding from the world together and it fit Amelia just fine.

They didn’t even let Meredith in on their hiding session. Meredith still went to work and she came across her own problem. She noticed that DeLuca was falling apart. DeLuca was still treating Suzanne and Dr. Riley was pushing further than necessary. She had DeLuca doing everything for the patient. He was watching as Suzanne circled the drain and there was nothing he could do about it. It was taking a toll on him. DeLuca needed someone to step in and so his sister went to Meredith. Meredith knows DeLuca’s history. He could be having a manic episode and no one would know it.

Carina was worried. She said her brother was the same age that her father when he began showing symptoms and so she asked Meredith as Chief of General Surgery to intervene. Meredith took her concerns seriously. She went to Bailey and together they pulled DeLuca off of Suzanne’s case. They even got rid of Dr. Riley. The two chiefs decided to put Suzanne back on pain meds and the doctors they removed were agonizing over that decision. DeLuca and Riley felt like they hurt Suzanne over nothing and they were upset about that when they got back a test result.

The final test they ran before they were pulled. This test result showed that Suzanne was dying from a rare disorder that the doctors have only read about. They now knew how to treat her and so they put themselves back on her case. They returned to Suzanne. They gave her the medication she needed and Meredith took DeLuca to the task. She thought he took too big of a risk. She was thankfully wrong because Suzanne’s condition did improve and so Meredith took the victory lap even though it wasn’t hers.

She tried talking to DeLuca later. He lost it and he began screaming at her right there in the hallway. DeLuca was in a manic state. It didn’t change the fact he was right about his patient and so DeLuca walked off feeling justified. It wasn’t a great moment for the hospital. Bailey did reunite the homeless kid Joey with his foster siblings and so there was a highlight. Only it didn’t matter so much when it was compared to other things. Like Scott died. His wife Rachel was so upset that she pushed away from her boyfriend and so who knows what’s going to happen between them.

Jo did call her husband afterward. She told him she loved him and she asked to be a part of anything that was happening.

Amelia realized she wanted to be with someone who would love her and the baby no matter what and as it happens that were her sisters. Not Linc!

Meredith tried contacting Alex and he ghosted her as well.