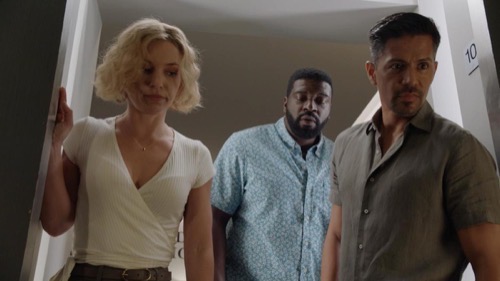 Tonight on CBS their reboot of the classic series Magnum P.I. airs with an all-new Friday, December 18, 2020, episode and we have your Magnum P.I. recap below.  On tonight’s Magnum P.I. season 3 episode 3 “No Way Out,” as per the CBS synopsis, “As Magnum, Higgins and TC try to pull one over on a customs agent to get Higgins a green card, armed gunmen suddenly storm the federal building and start taking hostages.”

Magnum is called into immigration regarding the marriage licence that he applied for months ago. He says he applied because when he met Juliet he thought he met the love of his life. The immigration officer asks why the love of his life applied for a marriage license two weeks later with a different man. We then see Juliet, she says she called off the first marriage, Theodore called off the second one, he believed that if she could cheat on Magnum, it was only a matter of time before she cheated on him.

She says she is ashamed to tell him that she has severe commitment issues. She has deep fears of abondonment that stem back to her difficult relationship with her father. She tells him that she has a lot of work to do on herself before she can get into a healthy relationship.

Rick calls Magnum how it went, he says perfect. Magnum tells Juliet that he can call him a genious now. Juliet gets a text and she is smiling like a fourteen year-old girl, Magnum says let me guess, it’s the doctor.

Magnum, Juliet and Theodore are in the elevator, it stops and the lights go off, then they hear gun fire. They have no service on their phones. They climb out of the elevator by the ceiling and once out they hear voices, but in the government office there is nobody, it look like whoever was in there rounded everyone up.

Magnum goes to call reinforces and still there is no service, he says these people must be using cell jammers. Theodore says if that is the case, they are pros. They find a landline and call Gordon to tell him what happened. They find a paper on the immigration officers desk, it basically says that he felt Julia, Magnum and Theodore were pulling a fast one on him. Julie tells Magnum they are going to revoke her visa and it is his fault. Gordon tells them that he is on the way with back up, stay put. Meanwhile, Rick is wondering where they are.

Gordon and the force arrives at the building where the three are located, he tells them there are about twenty five hostages lined up by the main floor window. Magnum tells Gordon the perpertraitors know they are there in the building and they are hunting them.

There are four masked gunmen, three men and one women and all with semi-automatic rifles. They are all dressed in black, there is one man with a black beard. One is after them, so there are five hostiles total. Gordon says they haven’t reached out to them yet, maybe they are waiting for the media. They are watching live video cam of the the scene downstairs, they can figure out which one looks like he is giving all the orders.

Meanwhile, Rick is worried, it has been over two hours and he just knows that they are in trouble. Rick finds out about the hostage situation in the building where the three went.

Gordon gets a call from CIA and asks if he is familiar with Ray Vaughn. Gordon says yes, he was indicted for revealing classified information on a mass surveileince of Americans and he fled to a non-extradition country where he is currently hiding. The guy says Indonesia, and he is not hiding anymore, they have him now. Gordon says, “you did an extraction, you’re CIA.” The man says, Ray’s brother, Freddy Vaughn, thinks Ray is a patriot not a criminal. When his brother’s plane lands, he wants his brother on board with the pilot so they can fly him to another non-extradition country; then he will release the hostages, or not.

One of the captors finds Juliet, asks who is with her, she says alone; he tells her she is lying. All of a sudden, Magnum and Theodore come from behind and get the guy. The guy says his friends are going to look for him, and when they find them, they are going to shoot them all. The guy has a tattoo on his arm, he is a ranger and he was dishonerably discharged. One of the guys mates call for him and when he doesn’t answer, they threaten to shoot a hostage. Theodore calls them and says he is on his way down, don’t shoot the woman.

Freddy is on the phone with Gordon, he tells him to get his brother free or he is going to kill hostages.

Juliet is with Magnum, she tells him that he has no good plan just like, just like the one he had for her to keep her visa. He tells her that she could have always married him and there wouldn’t have been a problem with her visa. The two are arguing when another shooter comes in, it is actually a phone recording, Juliet is hiding under a desk and then Magnum tries to take the guy by surprise. The elevator opens, another shooter arrives.

Magnum dresses up as one of the shooters and takes down Freddy. Meanwhile, Juliet is on the main level taking down the woman shooter. Magnum makes it down safely, all the hostages are freed. Rick is there, he is thrilled that everyone is ok.

Because all the hostages were saved in the immigration office, the officer decides to close Juliet’s case. She doesn’t have to marry Magnum or Theodore.