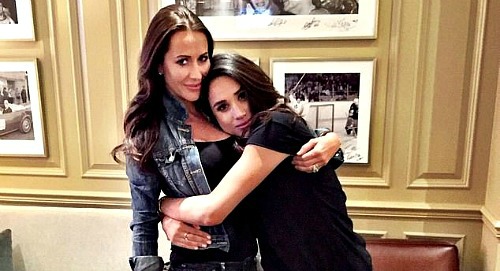 British royals news reveals that word is getting around about how Meghan Markle may be feeling about the recent controversy surrounding her friend Jessica Mulroney. As you might be aware, Jessica was fired from her reality show on CTV called “I Do, Redo” and from ABC’s Good Morning America after a heated disagreement over racism with a fashion influencer named Sasha Exeter that resulted in Mulroney’s threatening to sue Exeter.

Mulroney has since issued a public apology for her threatening behavior on Instagram and she has stated that she’s decided to step back from social media and lend her platform to more diverse voices.

Well, now the Daily Mail is reporting that “close friends” of Meghan Markle’s are saying that Meghan is “absolutely mortified” with Mulroney’s “tone-deaf” threats and can “no longer be associated with her.”

One of these close friends has allegedly said that “Meghan is absolutely mortified that she’s been dragged into this complete mess. She said Jessica is in no way a racist, but the way she handled the situation was tone-deaf and heartbreaking.”

The friend also allegedly said that because of what’s at stake, Meghan can no longer e associated with Mulroney – at least not in public. The friend also was reported to say that Meghan needs to preserve her dignity and her own reputation.

Finally, the friend said that “it’s not like Meghan can just call up ABC and defend Jessica. There was a reason Meghan waited so long to make a statement. She wanted to get it right. She said she urged Jessica to do the same thing from the get-go.”

Here, the alleged friend of Meghan’s is referring to Meghan’s virtual speech to her former high school’s graduating class, in which Meghan discussed racial inequality in light of recent national events.

Meghan and Prince Harry are said to be quietly considering how they can lend their voices to issues of diversity that have been front-and-center in the nation recently.

We should note that Meghan Markle has not publicly commented or released a statement of her own on the situation involving Mulroney’s words, actions, or her firing from various outlets. And we should note it’s quite unclear who the “sources” are who have allegedly spoken with the Daily Mail.

At any rate, this situation seems to be still unfolding, and we’ll keep you up to speed on the latest. Be sure to check back here at CDL for more British royals news and updates.