Meghan Markle In Trouble With Palace Over Necklace – Felt Frustrated and Emotional, According To New Book 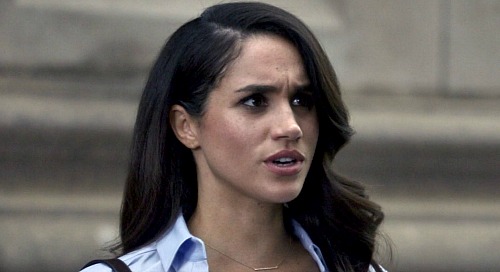 British royals news reveals that Meghan Markle felt quite frustrated after a palace aide disapproved of her choice in jewelry back in 2016, before she married Prince Harry.

The claim is being made in “Finding Freedom,” the upcoming tell-all biography of Harry and Meghan that details their exit from royal life. The book, which is written by Omid Scobie and Carolyn Durand, is due out on August 11 but has been excerpted in various outlets early.

Well, the book is getting a lot of media attention because it seems to be very pro-Harry and Meghan and anti-Palace in nature. At least that seems to be true of the excerpts that have been trickling out of the book as teasers.

For example, it’s been reported that the book claims that Meghan Markle felt shunned by Kate Middleton, and that Prince Harry felt that Prince William was snobbish toward Meghan.

The book is quickly getting the reputation of being nothing more than a litany of complaints about how the royal family, palace aides, and the entire institution of the monarchy wronged Harry and Meghan.

In fact, the more that information comes out of the book, the more people seem to be wondering whether Harry and Meghan were, in fact, active participants behind the scenes in feeding information to the authors.

Of course, the authors claim that Prince Harry and Meghan Markle had nothing to do with the book, and that they relied on insiders and their own knowledge base in gathering information.

At any rate, one story that “Finding Freedom” recounts is how Meghan was treated after she was photographed in a necklace with the initials “H” (for Harry) and “M” (for Meghan) on it.

This was back in 2016 when Meghan and Harry were dating. According to “Finding Freedom,” a concerned palace aide didn’t think that it was a good idea for Meghan to be wearing that jewelry out in public.

As People Magazine has reported, the book claims that “she [Meghan] was advised that wearing such a necklace only served to encourage the photographers to keep pursuing such images – and new headlines.”

The book goes on to claim that while Meghan said very little on the actual call over the concern about her necklace, she later complained to others that she felt “frustrated and emotional,” and that it was a “surreal experience” to actually be told what jewelry to wear or not wear.

It seems that Meghan felt that she was getting mixed messages and that she was being blamed for encouraging pictures that the palace didn’t like.

It appears that there may have been a deeper issue here, with some question over how Meghan should handle photographers – i.e., whether she should acknowledge them or appear to ignore them completely.

At any rate, here we have another instance in which there seems to be a tendency on Meghan Markle’s part to create a sinister motive behind some palace aide’s actions or suggestions.

That certainly seems to be a theme in “Finding Freedom,” and we’ll surely hear more of these stories. As the book nears its publication date. Do you plan to read “Finding Freedom?” Be sure to check back here at CDL for more British royals news and updates.