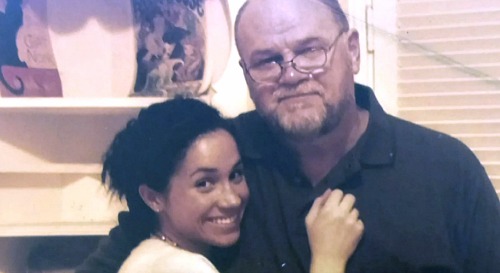 British royals news reveals that Meghan Markle’s estranged father Thomas Markle has a few things to say about what he’s seen from the upcoming tell-all biography, “Finding Freedom.” The book, which is written by Omid Scobie and Carolyn Durand, has been excerpted in various sources ahead of its release, which is scheduled for August 11. And it seems that Thomas Markle isn’t keen on what he’s read so far.

This all comes from statements made by Thomas Markle’s son, Thomas Jr., who claims that Thomas Sr. has completely given up on having any sort of reunion with Prince Harry and Meghan Markle going forward, as Thomas Sr. “doesn’t trust her anymore.” The Mirror reports that Thomas Jr. has said that Thomas Sr. was angered after reading portions of “Finding Freedom.”

Thomas Jr. is Meghan Markle’s half-brother, and he is reported to talk with his father every day. Thomas Jr. stated that Thomas Sr. doesn’t trust Meghan and “doesn’t want to know that person because of the lies, manipulation, and deceit.” Thomas Jr. also revealed that Thomas Sr. recently celebrated his 76th birthday but did not hear from Meghan.

It also seems that Thomas Sr. takes issue with some of the things he’s read in “Finding Freedom.” The book claims that he ignored messages and calls inviting him to attend Prince Harry and Meghan Markle’s wedding in 2018. But Thomas Jr. now says that his father was hospitalized at that time and had his phone turned off. In other words, Thomas Sr. wasn’t “ignoring” messages.

Thomas Jr. also disputes another claim made by the book – that Prince Harry spoke with Thomas Sr., telling him that “if he’d listened to him [Harry], there wouldn’t have been any problems.” Thomas Jr. says that the conversation “just did not happen.” Further, Thomas Jr. says that Thomas Sr. called Meghan “scores of times” before the wedding, but Meghan did not respond.

We should note that the authors of “Finding Freedom” state explicitly that Prince Harry and Meghan Markle did not contribute to the book, and that they got information from inside sources and their own reporting over the years. But it seems that Thomas Sr. may have the clear impression that Harry and Meghan back what’s in the book – which is a sentiment he shares with many royal watchers as well.

At any rate, it doesn’t at all sound like Thomas Sr. is willing to reconcile with Meghan anytime soon, and we doubt that Meghan will be contacting her father going forward either. It sounds like a real family mess that is only being exacerbated by the claims trickling out of “Finding Freedom.” Stick with CDL for all your British royals news and updates – we’ve got you covered with all the latest updates!