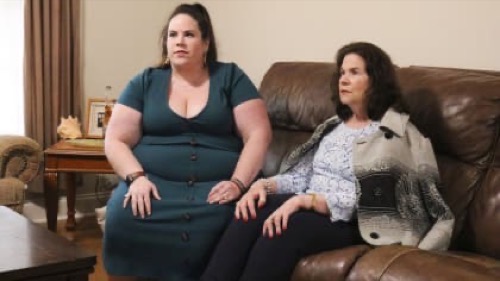 In tonight’s My Big Fat Fabulous Life season 8 episode 3, “Slipping Through My Fingers,” as per the TLC synopsis,“During a weekend trip to Wilmington, Chase shocks Whitney by asking her to move in with him, but is she flattered or annoyed? When Covid-19 hits too close to home after some scary news from Buddy, Whitney fears for the safety of her parents.”

Whitney arrives with her mom to see Chase. He has a welcome home banner and the house looks good. It looks like he is trying to talk her into moving to Wilmington. When he throws it out in a simple conversation, she gets insulted. He shows them the backyard and then offers to go out to eat. He tells her they can talk after.

They arrive at Oceanic where his sister works. They sit and talk about their wedding and possible venues. Whitney has already reached out to one venue. Chase’s sister arrives to see them and sit and talk. She asks if they are headed to see Chase work tonight at what she calls a questionable bar. Whitney hopes she is wrong. She doesn’t want to see her fiancé working in a seedy place.

They head out on a pier and enjoy the view and the beach. Whitney likes it. She wants to go to the beach the next day. Her mom is happy Whitney is happy. She hopes they can work out their living situation. Whitney and Chase talk alone. She tells him she is thinking about moving in with him here.

Chase heads to the bar he has been investing his time in. Whitney takes her mom to the B&B to check-in. They talk with her dad by speakerphone and discuss how Chase has offered her to move in. He thinks it isn’t sensible given her business is thriving.

Chase brings Whitney and her mom to his club to see the space while it is not open. Whitney learns that Chase has named a drink after his friend but not one after her. She feels like she is in competition with the bar. As the visit continues, she also starts to get the vibe that he was never really planning to move to Charlotte.

Back at the B&B, Whitney and her mom talk. She feels like Chase is trying to change the terms of their relationship. Later, Whitney arrives at the club to support Chase. He makes her very own signature drink, The Whitney. She drinks and relaxes while he works. She dances with his roommate. The club isn’t very full due to COVID. She leaves to head to his house to sleep. She isn’t a fan of the bar. It isn’t the greatest for their relationship.

Chase and Whitney take the dog on a walk on the beach. They need to talk since she is leaving today. They play with the dogs in the waves. Whitney loses her ring and looks for it frantically. She cries as they search in the ocean but the waves are too much and the ring is gone.

Whitney and her mom are in the car driving, talking about her ring. She is also upset about the spread of COVID and every that is going on. His mom thinks they need to slow down and think more before they marry. Chase calls. His mom may have the virus and he is now in isolation. Whitney is even more upset and terrified. Whitney calls her dad to warn him about going to work. Her brother answers and she tells him he needs to stop their dad from traveling around. Whitney decides to stay with her mom so that she is safe since her dad travels.