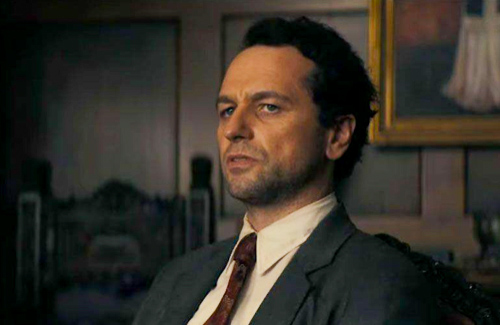 Tonight on HBO their new series Perry Mason Based on characters created by author Erle Stanley Gardner, airs with an all-new Sunday, August 9, 2020, finale episode, and we have your Perry Mason recap below. In tonight’s Perry Mason season 1 episode 8 called “Chapter 8,” as per the Showtime synopsis “In the Season 1 finale, the team receives some unvarnished critique from Hamilton Burger, while Della presents an increasingly stubborn Mason with her case for putting Emily on the stand.

As the sensational trial winds to a close, Mason, Strickland, Della, and Drake attempt to tie up loose ends—and set the stage for their futures.”

Perry Mason the season 1 episode 8 airs at 9 PM – 10 PM ET on HBO. Make sure to bookmark this spot and come back for our Perry Mason recap! While you wait for the recap make sure to check out all our television recaps, news, spoilers & more!

The baby is fine, Birdy cradles the baby, and cares off it. Emily is upset, her eye is bruised and she wishes she didn’t look like that for court.

In court, Detective Ennis is on the stand and asked if he ever killed a man, he says yes, while he was overseas serving his country. He was the first detective on the scene of the crime. Ennis says the location was smart. Perry Mason calls him a hostile witness and keeps at him. Ennis says he doesn’t know why they did what they did. Perry tells him that they have a prostitute that has him in a Chinatown brothel for the sole purpose of nursing Charlie Dodson. Then one of his old pals just so happens to disappear as he is going to testify. Perry tells Ennis that he kidnapped Dodson.

Outside court, Perry is frustrated about what happened at court. Paul tells Perry that you don’t go in if you don’t get him, and he doesn’t get him.

Perry goes outside to clear his head, Paul calls home to check-in.

We see Emily, she is frustrated, it is the day after Christmas, she has dinner on the table and her husband walks out and leaves for the office. She bathes the baby and sings to it until the baby falls asleep on her. The phone rings, now we see her in court. It was George on the phone, she is now on the stand. She say that her husband was gone all the time and when he wasn’t he was unkind. He was the only man she knew and she thought things were supposed to be like that. With George, she felt like a person, he kept her on the phone for over an hour that night.

He told her that he loved her while they broke into her home and stole her son. Perry asks her if she had anything to do with her son’s kidnapping, she says she realizes that the only love she had in her life was her sons, he was her heart, so no she had nothing to do with his kidnapping. Emily is cross-examined, she is asked if she told George about her husband’s money, she says no. She is told that if it hadn’t been for her affair, there would be no kidnapping. She abandoned Charlie to have sex with George. Perry objects multiple times when she is badgered. In fact, she is told it is her fault that her son is dead. She says yes. Emily leaves the witness stand.

Outside the courthouse, the crowd is going crazy when Emily leaves.

Eily is at dinner, she opens a card with a baby foot imprinted on it.

Perry is trying to work out his closing statement and how he is going to discredit Barnes.

We are back in court, Perry says a man broke into Emily’s home and we all know what happened next. He shows a photo of Charlie and says he stood over his body in disbelief and Charlie should not have ended up like that. When he took the photograph, he wanted nothing more than to find those responsible and make them pay. He says if he thought for one second that Emily was guilty, he would walk her to the gallows himself. He goes on to tell the jury to seek truth in their decision. That man took Emily’s heart when he took her son, and he only asks that they be courageous when seeking justice.

The DA gets up and tells the jury that the truth is that Emily had sex with her boyfriend and let that man take her son. They should find Emily guilty.

Perry waits in the courthouse for a decision, he is worried that Barnes did some damage towards Emily. The jury is done for the night, it is three days and there is no verdict.

Paul Drake turns in his gun, badge, and an envelope to Commander Joe Morton.

Back in court, the jury is in. The judge has a note from the jury, he says he is going to say a few things and he wants no interruptions. They tied their best, they are deadlocked and cannot come to a decision, a mistrial is declared. The DA looks over at Perry, who is smiling at the news. Outside, the DA says they will be re-trying the case. Perry tells the press that he is not happy, his client is being abused by the system, she should have been acquitted. Then the DA loses it and says this has nothing to do with his candidacy for mayor.

One of the jurors was paid off, two were on the fence.

Emily is out of court, she doesn’t look happy. Perry goes outside with Pete and is told that he is going to go work for Burger.

Emily goes to see Birdy, she goes into the living room and she is there with a baby. She gives the baby to Emily and she holds him, she notes how different the baby boy looks compared to her son.

Della tells Perry that she will be working with him and when she passes the bar, the name of the form will change. He tells her that they will haggle about this later. A client is waiting, her name is Eva Griffin. The woman walks in and sits down. She tells the team that she is in trouble, Perry tells her that she has come to the right place.

Gene and Joe split the take on the deal when all of a sudden, some men come out of nowhere and put a bag over Joe’s head, then they push him in the fountain and drown him while Gene watches. Once he is dead, Gene takes his share of the money and his badge.

Perry goes to see Alice and tries to get answers and how the boy’s body was not in the coffin, but in the end, he doesn’t get the answers he was looking for.