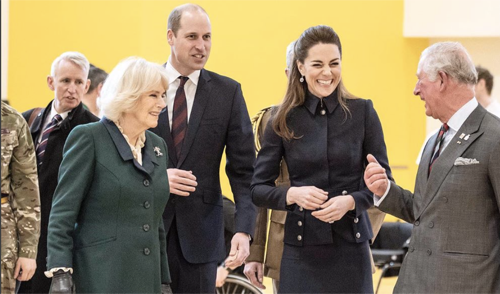 The British press wanted to have their own royal ‘fab four’ and it looks like they finally got it. Even though the original two pairs were supposed to be Prince William and Kate Middleton along with Prince Harry and Meghan Markle, it appears as though the Sussexes have been replaced with Prince Charles and his wife Camila Parker-Bowles instead. Here’s what you need to know.

When Meghan Markle debuted on to the scene back in 2017, the British press went wild. They were pleased to not only see Harry with the woman of his dreams but also liked the fact that both he and Prince William had two partners by their side that the media quickly dubbed as the ‘fab four.’ But after one negative experience led to another, Prince Harry and Meghan Markle began to pull back from their joint appearances with the Cambridges. If that weren’t enough, there were also reports of a supposed rift between the two royal brothers along with plenty of criticism from the press towards all of the things that Harry and Meghan were doing behind the scenes, including their quick jaunts across Europe on private jets.

Having had enough of it all, Prince Harry and Meghan Markle made the ultimate decision to not only step down from their roles as senior members of the royal family, but they also decided to move to Vancouver, Canada. Their decision ended up leaving a gaping hole in the royal family.

Thankfully, both Prince Charles and Camilla Parker-Bowles have decided to step up to the plate. The future King of England along with the Queen Consort teamed up with Prince William and Kate Middleton for a very special royal engagement at the Defense Medical Rehabilitation Centre Stanford Hall in Loughborough. The British media are even speculating that we might be seeing more of the Cambridges spending time with the Prince of Wales and the Duchess of Cornwall in months to come. Could this mean that Harry and Meghan have officially been replaced? Possibly so!

In the meantime, come back right here for all of the latest news and updates on Prince Harry, Meghan Markle, Prince William, Kate Middleton and the rest of the royal family.